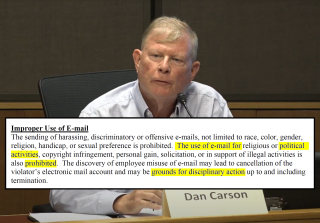 New documents from the city also reveal that all emails Carson sent in 2022 regarding measure H appear to have been deleted from his city account.

From March through May 2022, Carson sent at least 15 emails from his city account regarding political activities including one offensive email, each a violation of the city’s “Electronic Communication and Voice Mail Policy” and “Improper Use of E-Mail.” The policy states:

“The sending of harassing, discriminatory or offensive e-mails, not limited to race, color, gender, religion, handicap, or sexual preference is prohibited. The use of e-mail for religious or political activities, copyright infringement, personal gain, solicitation, or in support of illegal activities is also prohibited. The discovery of employee misuse of e-email may lead to cancellation of the violator’s electronic mail account and may be grounds for disciplinary action up to and including termination.” (Our emphasis).

An additional section of the policy states: “(Emails) must not be used for the expression of ill will or bias against individuals or groups…”

On April 7, 2022, Carson sent a city email to a Davis resident about Measure H with the following message:

“One leading opponent I am told said UC Davis students should have to live in Vacaville instead of Davis and commute by train. This guy gets to live in one of the nicest areas of Davis on a home with his mother. Talk about entitlement.”

The mother in question is 83 years old, requires a wheel chair or a walker, has blood pressure and cancer-related medical issues and cannot live on her own. The mother’s son, who opposed Measure H, compassionately lives with his mother to provide elder care.

Carson also violated the city’s written policy concerning electronic communications when he signed a March 27, 2022, email with a campaign statement, as follows:

According to the city’s policy: “Employee e-mail signatures may contain only business information, such as job title and contact information.”

The following is Carson’s March 27, 2022, email and an enlargement of his city email and signature: 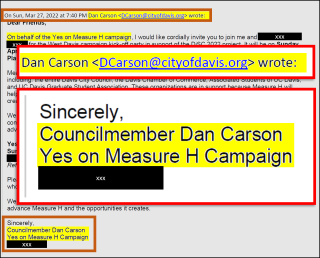 Based on our third request under the Public Records Act to the city, all of Carson’s outgoing emails concerning Measure H from January through September 29, 2022, are now no longer available. A representative of the city indicated, “The City of Davis does not have any records responsive to your request.”

The authors of this article are in possession of numerous 2022 Carson campaign emails, sent from Carson’s city email account, about Measure H that were previously provided to us from the city. It appears someone, or some event, may have deleted these outgoing messages from Carson’s city email account after our initial press release or related information was made public. When presented with this information at the October 18 City Council meeting Carson made no comment. 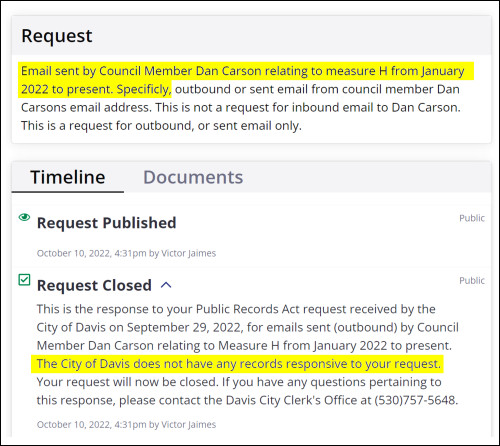 We previously reported that in a series of 15 emails improperly sent over several months from his publicly-funded City of Davis email account, Councilmember Dan Carson:

Carson’s emails were obtained based on a Public Records Act request to the City of Davis.  Carson sent these emails, including one message that in all probability was a mass mailing for a campaign “kick-off” event at Carson’s home, from his City of Davis account, either advocating for Measure H or defending his private lawsuit.

It is a violation of Government Code Section 8314 for any elected local officer to use public resources for a campaign activity or personal purposes, except for incidental and minimal use of those public resources.

David L. Johnson worked 20 years as a manager of legislation and public information for a state agency in Sacramento. Now retired, he works from time to time as a free-lance journalist in Davis.

Colin Walsh has worked as a litigation consultant for 20 years, is the chair of the City of Davis Tree Commission and has been involved in Davis politics off-and-on since 1988.

Well, according to our city attorney it’s all incidental use. You know, using a city email account for private purposes, using a city email account for a private campaign, deleting emails from city accounts (is there a retention policy?)., All very suspicious. But claiming incidental use is more like a CYA stance for legal reasons for the person doing the wrongdoing, rather than doing what’s best for the people of the City of Davis. What exactly is a city attorney supposed to be loyal to?

Alan - Dan Carson represented to the City Council and the City Attorney that he had only sent 2 emails by mistake from his City of Davis email account. The City attorney stated that that sounded like incidental use. Unfortunately it apers that Dan mislead (intentionally or otherwise) the City attorney and the City Council as to just how extensive his of his City of Davis email in the furtherance of a political campaign was.

As to the missing emails. The City does have a retention policy, but the City policy relies on the Council members themselves to determine what should or should not be kept. So if a council person deletes email from their account, that email no longer shows up in public records requests. In this Case, Dan Carson's email account now appears to have no email sent by Dan Carson in 2022 about measure H whatsoever.

It is unclear if the City has deeper backups of deleted email, but a records request asking for deleted emails from Carson's account also came back with no records found.

By the way, in our first press release about Councilmember Dan Carson's emails, not one person, including Mr. Carson, has refuted any of the facts.

Alan C. Miller - when the city attorney made her comment about "inadvertent mistakes," she was referring to only two Carson emails. At that time, she did not know that we had a trove of similar campaign emails sent by Carson. Of course, Carson knew how many he had sent, but downplayed it in his comments at the city September 20, 2022, council meeting.

"Dan Carson's email account now appears to have no email sent by Dan Carson in 2022 about measure H whatsoever."

Sounds like when Nixon released the Watergate Tapes and there were those 'mysterious' gaps. Says the guy old enough to remember that.

"Dan Carson's email account now appears to have no email sent by Dan Carson in 2022 about measure H whatsoever."

Looking forward to the updated City legal opinion with the new evidence :-|

I am no longer shocked or surprised by any of the completely unethical and scurrilous behavior by our City Council(particularly Dan Carson); however, I am beyond appreciative of the Johnson/Walsh ongoing deep dive into the behavior of said individual. The lack of transparency and obfuscation by our City Atty. is troubling.

The fact that the Thompson campaign manager told me on a phone conversation that she and Thompson had "never heard of Measure H" when Carson had contacted them through a city e-mail server is also outrageous.

Let's give Adam Morrill(District 4) and Kelsey Fortune(District 1) a chance to bring some needed ethics to our City Council.

Another day another petty attack at the Davisite. I just don't think that post Hilary Clinton anyone cares about this sort of thing. But hey its silly season, with mail in ballots in the hands of voters, its open season on outrage.

What about Morrill running his campaign out of City property? His filing with County elections has a contact address at 1717 5th St. That is the address of the City of Davis Public Works Department.

All right Ron, so you want to suggest that a candidate is running their campaign from City offices based on soemthing you see online but you are not at all concerned about the hard evidence that Carson used City resources to campaign for measure H. you have no other evidence, just mud to sling, but hard evidence with publicly available records about Carson actually using city resources is just another petty attack.

You even wrote a letter to the paper defending Carson for suing his own constituents.

Based on publicly available documents, it looks like when Morrill filled in his paper work to run for City Council he answered the line on the candidate declaration for business address was filled in with his place of work - a truth full answer. It doesn't really make sense for the County Clerck to use Morrill's place of work address as his contact.

Well, since the ill fated Measure H misleading messages were clear even on their signs, we can expect this from Carson.

Is there a way to know how much his pockets were lined by developers during that period? That will be the most revealing information that needs to be public.

Susan, In the fall out of Carson's ill-fated lawsuit we know that the judge ordered Carson personally to pay $42,000 to the people he sued to cover their attorney’s fees. this Judgement was against Carson personally, and could have been sent to collections. We know that the Measure H campaign committee which was solely funded by developers paid the judgement against Carson.

Seems like Ron Glick forgot that the problem with Hillary's emails was using a private email server for government/official (and potentially classified) communications.

Dan Carson's issue is the opposite of that: using government/official emails for private purposes (along with deleting evidence of said violations). It's also a larger issue of him entangling his role as a public official and working for a private campaign, including suing his own constituents.