Happy 4th of July Annoying Uncle and Everyone Else
Refugee Kids Behind Bars: My Tour of the Juvenile Detention Center in Woodland 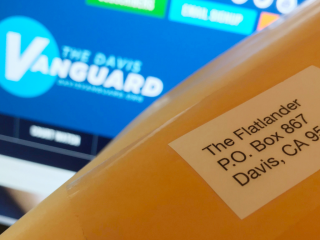 The Davis Vanguard is alleged to have participated in a political campaign in violation of it's non-profit status. A form 13909 Department of the Treasury Internal Revenue Service Complaint against the Davis Vanguard was given to the Davisite by The Flatlander. The Flatlander received an anonymous envelope in its PO box containing the forms and other documents which appear to have been filled with the IRS.

The complaint is anonymously filed and the cover letter CC's The Sacramento Bee, The Davis Enterprise, The Daily Democrat, and The Flatlander.

The Complaint alleges that David Greenwald, "Founder, Editor, and Executive Director of the Davis Vanguard... repeatedly posted to a Facebook group whose primary purpose was to promote the campaign of Dean Johansson for Yolo County DA in the June 2018 election." And that Greenwald's posts "promoted Dean Johansson and criticized his opponent, the incumbent DA Jeff Reisig." The complaint alleges that  "Mr. Greenwald was using the Davis Vanguard to promote the campaign of Dean Johansson with knowledge and intent to affect the race."

The packet received by Davisite.org contained 14 pages of supporting evidence. This evidence consists of Greenwald postings to a Johnasson volunteer group, often including links to the Vanguard blog and would seem to generally support the allegations in the complaint.

"Under the Internal Revenue Code, all section 501(c)(3) organizations are absolutely prohibited from directly or indirectly participating in, or intervening in, any political campaign on behalf of (or in opposition to) any candidate for elective public office. Contributions to political campaign funds or public statements of position (verbal or written) made on behalf of the organization in favor of or in opposition to any candidate for public office clearly violate the prohibition against political campaign activity.  Violating this prohibition may result in denial or revocation of tax-exempt status and the imposition of certain excise taxes." (IRS Website)

The Vanguard website states, that it is a 501(c)3 non-profit. The IRS website has publicly available tax filings for The Vanguard from 2013-2015 that indicate claimed "Gross receipts not greater than $50,000" for each reported year. (IRS database) No filings were found for 2016 or 2017. The IRS website states that, "In general, exempt organizations are required to file annual returns." (IRS Website)

The IRS website lists David Greenwald as the Principal Officer of the Davis Vanguard. Mr. Greenwald's Linkedin page states that he is the "Owner, The People's Vanguard of Davis" (linkedin)

The IRS website also offers ways for the public to report prohibited activity, "Members of the public may send information that raises questions about an exempt organization's compliance with the Internal Revenue Code" and that "They may use Form 13909, Tax-Exempt Organization Complaint (Referral) Form, for this purpose" (IRS Website) and that is what the Davisite has received and appears to have been filed with the IRS.

It's important to emphasize the fact that the complaint was filed by a member of the public, not by the IRS. Whether the IRS deems the likely impact of the alleged violation large enough even to warrant investigation is an open question, as is the validity of the complaint.

Reisig has won the election, so what’s his story???

That elections be conducted in a fair and law abiding way should be of utmost importance to all Americans. This is the case whether we are talking about Russian interference with the national election or local cases like this. "Innocent 'till proved guilty" applies here, of course, but it is worthwhile to see where this goes in order to keep our local elections.... clean. Thanks for posting.

Davisite writes that the documents "would seem to generally support the allegations in the complaint."

Maybe the Flatlander could put the complaint and supporting documents on publicly available web location - say a Google drive folder open to all - so everyone can judge for themselves the truth or falsity of the allegations made.