Uncivil Discourse at the CivEnergy Forum 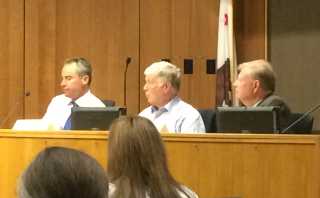 The Yes on L side did not behave well at Sunday’s CivEnergy forum.

This inappropriate behavior certainly wasn’t CivEnergy’s fault.  They had picked an excellent moderator in the form of attorney and former City Council candidate Linda Deos, who asked fair and neutral fact-finding-oriented questions about the West Davis Active Adult Community (WDAAC) project.  And along the same lines, CivEnergy’s Bob Fung crafted from audience comment cards two more neutrally worded questions.  Actually, all were framed in terms of discussions rather than questions, a touch that I rather liked.  Deos further warned forum participants to keep their answers focused on the project and not make them personal.  Alas, that was not to be.

The Yes on L side came in hot in its opening statement, forgoing the opportunity to tell the audience the positive points about the WDAAC.  Instead, WDAAC developer Jason Taormino accused the No side of taking a page from Trump’s playbook and charged them with telling “big lies” and “little lies.”  Not only was this uncivil, but it was a missed opportunity to inform voters who haven’t been following every back and forth in the newspapers and online.

The Yes side got on track for a little while after that, but in response to a question about the whether the inaptly named “Taking Care of Our Own” buyer’s program would be racist in its effect (as opposed to its intent – see background here and here showing that “our own” are disproportionately white), Taormino, rather than responding, derided the No side’s detailed and substantiated case as “baloney,” declared that the No side just doesn’t want to take care of Davis’s seniors, and asserted that this was just a sport to them.  He further accused the No side of being against every development project.

At best, these kind of unsubstantiated and derogatory remarks are a distraction from the issues.  They are intended to discredit the person rather than the argument, implying that listeners should discount what the opposing side is saying.  The No side understandably felt obligated to defend itself, and so audience members end up deprived of what could have been a thoughtful discussion about a very important and complicated issue.

At worst, these kinds of personal attacks have a chilling effect on our democracy.  When people have volunteered their time to engage in political discourse, they should not be subject to personal attacks for their trouble.  This is not the anonymous internet, where such attacks are bad enough; this a community small enough where neighbor passes neighbor regularly.  No one needs that kind of hostility from their neighbor.  And knowing that they might be subject to that kind of hostility, who would want to participate?  Or participate again, once they’ve been attacked? Frankly, our democracy is under enough attack as it is; we need all hands on deck, not hands bloodied and beaten from our neighbor’s stomping on them.

To be fair, David Thompson and Dan Carson of the Yes on L side stayed above this fray, focusing on the benefits of the project as they saw them.  But you would think that the project’s developer would set the content and tone of Yes side’s case.  Indeed – and ironically – the CivEnergy forum almost didn’t happen because the developers, apparently, expressed concerns.  Perhaps the Yes side was looking in the mirror when it raised those concerns, because the bad behavior was all on its side.

Again, none of this is on CivEnergy, Bob Fung, or Linda Deos, who ran an excellent forum that did manage to inform on a number of important aspects of the WDAAC project.  The blame here falls squarely at the feet of Jason Taormino, who, I believe, owes the No side as well as audience attendees an apology.

Thanks for this summary, Roberta! As one of the two forum participants on the No on L side, I was taken aback by Jason Taormino's dismissive and mocking tone from the very start, and his unwillingness to engage in a substantive debate about the issues.

Yes, many thanks Roberta. I am so glad to have you here, speaking rationally and productively.

I am sorry if I offended you. I truly enjoy intellectual conversations with people who have differing opinions. However, it is not okay to lie in the pursuit of winning. It is an affront to democracy and we should shout it down no matter who is in power. To suggest the Alan Pryor's anti campaign has been expressing opinions rather than falsehoods is not accurate. It is not comfortable for anyone to hear the truth, nor for me to speak it, but we all lose if we stand politely by while those who have no moral compass say and do what they want.

First of all, this is not about "offending me." This is about maintaining appropriate discourse that promotes an informed electorate and maintains our congenial community. I was not personally offended, but I was outraged and disappointed.

Second, you accused the No side of lying, but nothing that you said at the forum showed that anything that they said was false -- besides which, "lying" is a very strong word, as it implies intent to deceive, which you also have not given any evidence for.

Third, your inappropriate remarks went beyond just accusing the No side of lying, as I describe above. They include also outrageous, insulting, and unsubstantiated accusations that your opponents don't care about seniors, that they are against all developments, that they are just arguing for sport. Notice that NONE of these is about the project. You made the discussion personal. That's inappropriate and unproductive. Frankly, you missed an opportunity to convince the audience about the benefits of your project.

(and sorry, thanks Rik. I didn't mean to leave you out).

I missed yesterday's forum due to travel out of town. Thanks to Bob Fung, Linda Deos and Tia Will for working as a team to make the forum happen.

The 6 comments that precede this one by me have touched on important questions, so I won't rehash any of those questions. I do have one question that has not as yet been raised, so I will ask it here and now. The No on Measure L team made the statement

"The city has granted the developer massive giveaways and subsidies by reducing project impact fees by over $3.4 million compared to fees normally charged new developments. That’s $3.4 million that’s going into the developer’s pocket and not being used for city infrastructure."

Given the limited time of the forum, an explanation of the calculations that support that statement was not provided. can the No on Measure L team please explain how they arrived at that $3.4 million number? I will post this same question in the Davis Vanguard discussion of the forum, as well as submit it as a letter to the editor with the Enterprise.

Jason Taormino: I agree with Roberta's points. You directed unfounded accusations and insults against both me and Alan Pryor. And you owe us as well as the attendees of the forum an apology.

Before the forum, your father and project partner. David Taormino, published an op-ed in the Davis Enterprise entitled "Words Matter" in which he apologized for the offensive tagline of the project "Taking Care Of Our Own". I would note that he did he did not mention the tagline words specifically nor did he mention the discriminatory and exclusionary content of the program. And as Tia Will stated in another on-line forum, "An apology because of how one’s error might have made someone uncomfortable is really not an apology for one’s action at all, but merely an acknowledgement that someone was made uncomfortable."

Your father did pledge to not use the "Taking Care Of Our Own" motto to promote the project any more. However, you showed up to the forum after this with a main display board for the project said “Davis Caring For Our Own” at the top in large letters. In addition, twice in the Yes on L team’s opening 5-minute statement, you used the phrase “Taking care of our…” and then used “community’s seniors” and “community members”. You apparently didn’t hear about your dad’s apology or didn’t care.

Your father also talked about the “commitment to principles of diversity” and that the WDAAC project “welcomes and embraces diversity.” It is very telling that when I talked specifically about diversity and discrimination in the forum and right after I accurately cited (U.S Census) statistics about the lack of representation of Hispanics/Latinos in Davis compared to Yolo County, Woodland, and California as a whole as an indication of the people without a Davis connection that the WDAAC project specifically would exclude as part of the restrictions in your "Davis-Based Buyer's/"Taking Care Of Our Own" program, your response was to mock the stats as “baloney” and to present some made up stats as an attempted "joke" that fell flat.