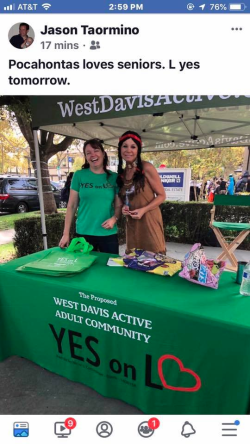 Yesterday, Jason Taormino posted the photo at the left from their setup in downtown for the Halloween walk, showing one of their volunteers dressed as Pocahontas.  Most people have heard of “blackface”, especially since Megyn Kelly recently had her NBC show cancelled over defending blackface as being “ok so long as you were dressing, like, as a character.”  So why does the Yes on L campaign think that it’s ok to dress in redface as Pocahontas?

People have been rightly and roundly criticized for dressing in redface before.  A student at Oklahoma university was pilloried for dressing in redface, with the recognition that a costume like that is “deeply disrespectful to the Native American community.”  Stephanie Fryberg, a Professor of Psychology and American Indian Studies at the University of Washington, as quoted in an article from Indian Country Today, asks, “Why are issues for Native people taken as less serious in the domain of bias and stereotyping and prejudice than for African Americans, why is there this difference?”

Indeed, there is no difference.  It makes a painful cartoon out of peoples who have a long history of marginalization and abuse at the hands of the U.S. government.  Furthermore, it trivializes the life of the real Pocahontas, who likewise suffered at the hands of white people.

Davisites should know that this is not appropriate. 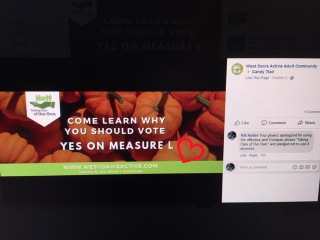 This follows a pattern of racial missteps streaming from the Yes on L/Yes on WDAAC campaign.  First, there is the offensive tagline for the project, “Taking Care of Our Own,” which they are still using.  Second, there is the evidence that their buyer’s preference program will end up perpetuating Davis’s history of predominantly white housing, which they have not backed off from either.  One has to consider, as Eric Gelber does, whether “at some point, the continued promotion of a policy in the face of evidence of its inevitable adverse discriminatory impacts–even if initially unintended–can no longer be deemed innocent or unintentional. At some point, motivational assumptions become justified.”

To be clear, there is a difference between being racist and doing something that is racist.  (See this fabulous video that explains the difference).  I am not saying that the WDAAC developers are racists.  They have, however, said and done things that are racist, the Pocahontas costume just being the most recent instance.

Davisites should take note and be concerned.

If the Native Americans had a Taking Care of Our Own rule back in the days of Pocahontas, we wouldn’t be having this discussion about Measure L because the vast majority of us would have been excluded.

Roberta, thank you for bringing this most recent, bizarre campaign activity by Jason Taormino to our attention. Although some might still argue that the pro-Measure L slogans (and the new photo) are not racist, I do believe the "Pocahontas" photo provides irrefutable evidence of a unique, "Dumb and Dumber, campaign strategy. As a friend replied when I told her about this earlier today, "You Can't Make Up This Stuff!"

What is equally amazing, though, is that our two newly-elected council members, including a woman renowned for promoting social justice, continue to support such a contentious project as WDAAC, in spite of its overtly exclusionary underpinnings.

This points to an ongoing pattern of insensitivity and obliviousness by the Measure L campaign. And as Eric Gelber pointed out in this article [https://www.davisite.org/2018/10/keeping-davis-white-land-use-policy-is-a-civil-rights-issue.html]:

“I take the Taorminos at their word that the local buyers’ preference program was intended to respond to their interpretation of the intent of [Measure J/R] –that is, to address “internal” housing needs. I believe there was no discriminatory intent. But the Davis-Based Buyers’ Program was a naive and misguided effort to address internal housing needs by simplistically saying, OK, we’ll just limit 90% of purchases to people connected to Davis. Then, in the face of evidence of how the local preference program as proposed would have a disparate impact (discriminatory effect) by disadvantaging non-white purchasers, rather than dropping the proposal, they dug in, and defended the program anyway. They subsequently gave mere lip service to the unfortunate phrasing of their promotional slogan–Taking Care of Our Own. At some point, the continued promotion of a policy in the face of evidence of its inevitable adverse discriminatory impacts–even if initially unintended–can no longer be deemed innocent or unintentional. At some point, motivational assumptions become justified.”