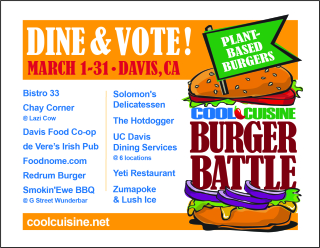 There’s no easier way to do something good for the planet (and your health) than to sit down and bite into a juicy, flavor-packed plant-based burger with friends or family. And thanks to COOL Cuisine, a partner of Cool Davis, seventeen eateries in Davis will be offering plant-based burgers or sandwiches on their menus throughout March as part of a fun contest involving all diners as judges.

Beef is a very resource-intensive product. The Burger Battle will offer a wide range of alternatives that are taste sensations, filling, and that diners can feel good about ordering. A beef burger can use more than twice the acreage and emit 10 times the greenhouse gasses than a meal made from plants. To produce one beef burger is takes the same amount of water as 33 showers or washing your car 15 times. In the last year many Silicon Valley companies rolled out patties that mimic the mouth-feel, juiciness, look, and flavor of a beef burger. All competing burgers, whether made from scratch or using commercial patties, and side dishes offered will contain no animal products. 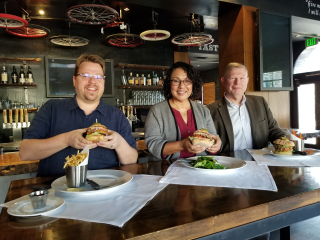 City Council Members Lucas Frerichs, Gloria Partida, and Dan Carson have all tried the newest plant-based patties and jumped on board to help spread the word about this interactive event. The Burger Battle hopes to recruit all Davis residents to try a burger or two and get inspired to eat plant-based meals a little more often, which will help our City reach its climate action goals. Every one of us can be part of that! Imagine if 5,000 burgers served are plant-based instead of beef in a one-month period—it adds up and has a real, positive environmental impacts.

The Davis Food Co-op Deli is competing in the Battle and is also a sponsor. The Co-op ran a free workshop for participating chefs to try out a variety of products they could use in their recipes and design, including a demonstration of how commercial patties fry up, how “cheese” tastes and melts for cheeseburgers, and the variety of egg-free mayonnaise flavors available. The workshop was presented via Facebook Live for any diner to learn about the products for home use.

Bistro 33 began offering an Impossible Burger a year ago and deVere’s Irish Pub has been serving a Beyond Burger in Davis since August – both say these dishes are among the top selling items on their menu. Between them they sell over 800 plant-based patties per month! They are both designing new toppings to add for the Burger Battle.

Redrum Burger has been offering other vegetarian and vegan options and is excited to try a different set of flavors. The Hotdogger is working on a wiener-burger that will feature a different Beyond Meat product, the Beyond Sausage (over 80 were sold at the Sunrise Rotary Oktoberfest this year)!

Chef Arturo, of Smokin’ Ewe BBQ (at G St. Wunderbar) was excited at the opportunity to compete. “I prepare BBQ all day, but my girlfriend is a vegan—I cannot wait to go experiment with different recipes using our smoker that my regular customers will love, and she can eat, too!”

More than half of the chefs are planning to design a hand-made patty from scratch for the competition, Every single one will be unique! For instance, Yeti Restaurant will provide a Nepalese spiced patty and Chay Corner will serve a Vietnamese bánh mì. UC Davis Food Service has six chefs who dove into recipe development last week for six campus locations. Detailed descriptions and locations of each competing burger will be posted by February 28.

In addition to dining on your own, you can enjoy sampling different burgers with your friends and colleagues by signing up as “tasting teams.” Teams of five people that taste at least four burgers together are eligible to issue their own awards. Everyone who votes will be entered in a raffle drawing for prizes. Learn more by going to coolcuisine.net or COOL Cuisine Burger Battle on Facebook.

We can't wait for this! Foodnome is a local network of home cooks, and we're about to take this Burger Battle by storm with the best vegan burger in town! You can find out more about us at https://www.foodnome.com/