On the So-Called "Parking Compromise" 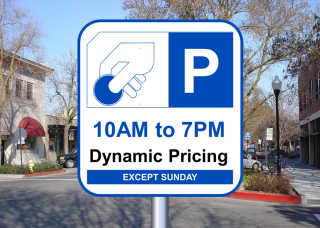 I want to thank every businessperson, customer, employee, visitor and friend who cared enough about downtown to object to the city's paid parking plan. If we had not spoken up they would have metered every space, endangering businesses and increasing our cost of living while reducing quality of life. While we deserve our moment of relief and celebration there are very real problems with the substitute plan the city is imposing.

Council decided not to put meters on the streets but to put them in nearly every public lot instead. This is 279 spaces that will go paid, a 600% increase. Common sense and all data says this will send drivers to the streets to avoid paying in the lots, making it harder to find a free space. This will hurt businesses, particularly those closest to the lots. The lot across from Woodstocks is going paid while there are three vacant storefronts on that block. The disincentive of paid parking will help ensure that the only occupants there continue to be homeless camps.

The Kinko's lot is not fully utilized now, and when the meters go in usage will drop by 50% or more just like the E St lot did. The Amtrak lot is not for downtown customers, but why does council want to punish people for making the environmental choice to park and ride a commuter train?

There were concessions to move the zipcars and jump bikes as downtowndavis.org suggested but these are only 3-5 of the over 100 spaces the city has removed over the years to cause the parking shortage. Increasing the number of employee permits is fine, but without incentive to use them they will be like the Olive Drive lot, where the city took space that 40+ cars parked in daily, paved it and turned it into permit parking that now stands empty. This plan is another such intervention where the city steps in and spends our money to make downtown parking worse.

The city called Olive Drive an “improvement”, just as every parking space removed was for similar improvements. So the promise to put the money earned by the paid lots into a fund for downtown improvements makes business owners skeptical and trepidatious. As is the fund will likely go to more expansions of paid parking and more removal or restriction of valuable space.

This massive expansion of paid parking is being called a compromise, a middle ground agreement between two opposing interests. I want to know why the city was on the opposite side of 90% of the public and downtown businesses in the first place, necessitating a compromise. Why does staff  get to advance their own political agenda for paid parking? Why did they spend over one million tax dollars on consultants while trying to ignore the free (but contrary) opinions of the people who comprise downtown? Why should we have to accept 279 parking meters downtown when no one outside city hall wanted even one?

The City give a large amount of incentives to the new "adult community" in West Davis.

Now, they're looking for funds. Parking meters? That couldn't be one of the sources, could it? Or cutting back on city services?

They couldn't be in the developers pickets, could they?

Tell you what. We need a new council, one that listens to the people they are supposed to serve!

Good questions in this article.

"Why did they spend over one million tax dollars on consultants while trying to ignore the free (but contrary) opinions of the people who comprise downtown?"

If that's true, that is beyond irresponsible. Then they ask for money for important stuff like roads that are crumbling and wonder why people don't trust them.

Agree with other commenters; it's not too early to begin identifying viable candidates for next year's council election. I don't know about Daniel, beyond the paid parking issue, but certainly appreciate his initiative and writing on that subject.

And on Donna's mention of crumbling roads: just saw flashing caution signs that E. 8th Street will be closed at "L Street," from April 15 thru May 10. (Dates seem to be in flux.)

The E street seems to be at capacity every time I go downtown. I'd never even bother looking for a space there.

In response to Steve Kahn’s post on April 3rd at 3:56pm. “The City gave a large amount of incentives to the new “adult community” in West Davis” response. Your statement is patently false and untrue as it applies to the West Davis Active Adult Community. You have no factual basis whatsoever for your statement.

The public was overwhelmingly against meters downtown and I fully agree charging for lots is going to make street parking much worse. A partial compromise is bound to have unintended consequences.

During the Downtown Plan process we had to listen to consultants provide only anecdotal evidence that paid parking works. They cited other cities where metering was in place and downtowns were vibrant. They cited the mostly vacant 4th street lot as evidence that parking can be "managed" with pricing. This is not science. The past is not a counterfactual for the present, and one lot on the outskirts of town does not represent all of downtown. This "science" was then held up as superior knowledge to the voices of Davis business owners and residents.

I feel the process has not worked. Consultants' voices seem to have 10 times the weight as the voices of downtown businesses the plan is supposed to help.

I'm also skeptical of the cost-benefit. It's going to take many years just to pay off the investment and much of the "improvement" to downtown will be in the form of hiring new personnel to monitor the meters. Then, if the city ever does make a profit, there is no guarantee funds will be used wisely.

Very frustrating Davis can't do better than this.

>> Very frustrating Davis can't do better than this. <<

We could have. But the public outcry against it was deafening.

In response to Dave Taormino, that giveaways that your WDAAC development is receiving are well-documented here;
http://www.noonwdaac.org/huge-developer-give-aways.html