‘Davis Needle’ points the way between UC Davis and downtown 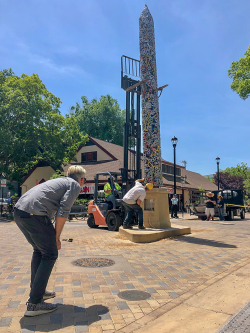 “I feel like I’ve been working on it my whole life,” artist Mark Grieve joked on Tuesday morning, as he adjusted the base before a forklift hoisted the sculpture into place. Crowds gathered to watch the installation, some of them enjoying lunch or beverages at two adjacent restaurants: Third and U Café and Pho King 4.

Artists Grieve and Ilana Spector designed and built the sculpture, and Mike Hollibaugh of Holly Solar devised and installed the internal LED lighting system. At night, an animated sequence of random, fluid lights will surge through the sculpture.

Rachel Hartsough, the city’s arts and culture manager, was there for the installation, and excited about its arrival. “The real surprise will be after dark, when the whole thing lights up and sparkles on the hour.”

The hourly spectacle, which lasts a minute, was inspired by the Eiffel Tower, which twinkles at the top of the hour from sundown to 1 a.m. The lights are programmable, and could be used to honor special events, such as Davis Pride, homecoming, or other festive city celebrations.

The sculpture is a centerpiece and culmination of the Third Street Improvement project, which beautified the corridor that links UC Davis with downtown. The project ­– initially approved in 2006 but delayed because of the recession – upgraded the two-block segment of Third Street, between A and B streets. Funds for the improvements came from a $3.3 million federal grant through the Statewide Transportation Improvement Program. The artists received $35,000 for the sculpture.

A ribbon-cutting for the project is planned for Saturday, June 1, at 11 a.m. when the Davis Farmers Market is underway.

City Manager Mike Webb stopped by Tuesday to see the sculpture go up. “I think this project is a fantastic gateway to more formally connect UC Davis and downtown,” he said.

Spector, one of the artists, said she was a little nervous as installation technician Dave Pedroli maneuvered a forklift to position the sculpture. They built it on its side. “I haven’t seen it standing up. It looks a lot taller,” she said. 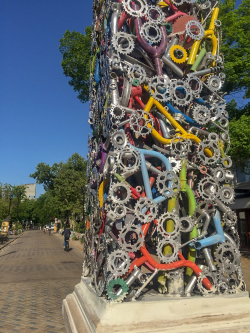 "The Davis Needle" is constructed of some 100 kids' bikes and other bike parts. It's the finishing touch to the city's Third Street Corridor project improvements, linking UC Davis and downtown Davis. This view down Third Street is toward the university. Courtesy photo.

She and her partner Grieve, both of Petaluma, used about 100 children’s bicycle frames to make the structure. “They are so cute and colorful,” she said, mentioning pink Barbie and powder-blue bikes. The exterior of the sculpture features sprockets and other bike parts collected in Davis in the last two years.

The pair designed a similar sculpture, “Cyclisk,” a 60-foot-tall obelisk off Highway 101 in Santa Rosa, at Jim Bone Nissan. Installed in 2010, it was named best of its kind in the nation at the American for the Arts Convention in San Diego in 2011.

Kathleen Holder, who works in the Social Sciences and Humanities Building just off A Street, said she walks and bikes daily down Third Street. She stopped to photograph the installation on Tuesday. “The whole improvement project is lovely. It makes a wonderful connection between town and gown. Now it feels like the gateway to the campus,” she said. “I think this may be one of my new favorite artworks in Davis. It’s really cool.”

Think Outside the Box 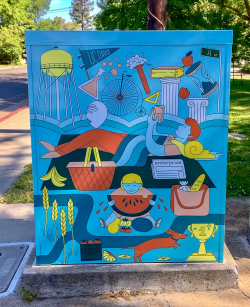 Lily Therens created the Davis-themed design that wraps around a traffic-control box at Russell Boulevard and A Street, near Davis City Hall. Courtesy photo.

On Tuesday, the city also completed another public art project, transforming traffic-control boxes into lively pieces of art. Thirteen regional artists worked with city staffers to create designs that were transferred to vinyl and wrapped around the boxes. The box locations include City Hall, International House Davis, and the Davis Arts Center.

The city has carried out similar projects with utility boxes, commissioning artists to design and paint them. The Think Outside the Box project allowed artists to complete work from their own studios in a wide range of mediums, including ceramics, mixed-media collage, abstract digital art and graphic design.

City staff encouraged submissions from artists who had not created public art in the past. Those selected received a $500 honorarium upon design completion.

Jessie Nakahara, arts and culture program associate with the city, said, “The project gave many of the artists a chance to figure out how to translate their work into a mode unfamiliar to them, which presented positive, creative challenges for them and for us. My biggest appreciation of the project is that we were able to place art around Davis that is mostly outside of the norm for what is traditionally seen around our city.”