The Sustainable Living and Learning Communities 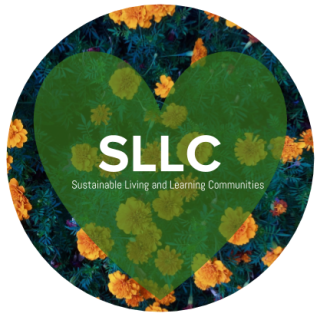 By Annika Forester and Colin Walsh

In the middle of Saturday afternoon at the 50th anniversary Whole Earth Festival a throng of die-hard festival goers left the UC Davis Quad and headed west. We gathered together with others at the Student Farm, a place on campus that showcases many of the values and ideals the Whole Earth Festival has celebrated for five decades. As special as the festival’s golden anniversary was, we were headed to something more important focused on the next 50 years.

Friends of The Sustainable Living and Learning Communities

Assembled were a subset of UCD alumni representing several generations of student leaders who had participated in various alternative or counter-culture activities while attending UCD. Over five decades we had lived cooperatively in the Tri Co-ops and the Domes, gardened at the Student Farm, created alternative learning experiences at the Experimental College, produced the Whole Earth Festival, and as activists held the University accountable not only to its founding Land Grant mission, but to upholding civil and human rights as well.

As a loosely woven tapestry of old friends with a shared collective history of formative, idealistic, altruistic and wonder-filled college years, we also came to celebrate as donors to the new Green Fellowship and Sustainable Living and Learning Communities (SLLC) alumni fund.  In less than a year since its founding, the fund has raised $80,000 to support both the vision and development of the SLLC, and its sibling initiative, the Green Fellowship.  We had come to celebrate the inaugural reception of these two new initiatives intended to propel a beloved corner of the UCD campus and the students who learn and work here towards a more hopeful, just and sustainable future.

The SLLC is situated in the westernmost part of the core campus abutting the 113 freeway. It includes the Student Farm, The Experimental Community Gardens, the Domes, Design Lab workspace, and Project Compost. From about 1990 on this area became known as the Sustainable Research Area (SRA) after student activism succeeded in protecting the Student Farm, the Domes, and the burrowing owl habitat from the encroachment of campus development that eventually included the construction of a new stadium and The Colleges at La Rue student housing. In today’s configuration, the Tri Co-ops (Pierce, The Agrarian Effort, and Davis Student Co-op) are included in the SLLC because of shared vision and practice, although not physically located within the geographic area.

The new SLLC amalgam bonds together what had been distinct learning communities with similar values and commitment to student agency, into a unified grassroots educational initiative that explores a broad range of principles and practices related to agricultural, environmental, and social sustainability. Together, they aspire to promote 4 values, according to the SLLC website: experiential learning, sustainability, community, and place. 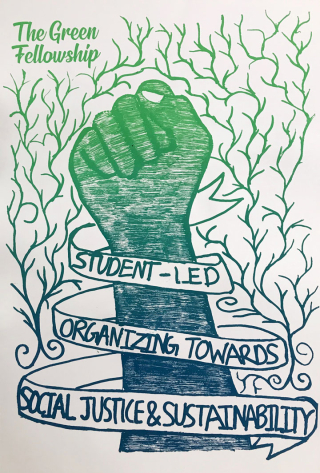 Besides unifying a specific geographic area on campus, the operative element common to all these spaces are the students themselves who live and learn within them.  Recognizing the importance of supporting student research, development and community activism, this alumni fund directs 70% of donations to the Green Fellowship, which will support students advancing social justice and environmental sustainability through hands-on interdisciplinary projects carried out within the spaces of the SLLC.

As part of the reception, donors met and heard from the fund’s first fellows, senior Aina Smart Truco, a Sustainable Environmental Design major from Davis, and Christopher Almaraz, a junior Community and Regional Development major in his first year after transfer from Hartnell College in Salinas.

Aina and Christopher related their experience as Fellows and co-presented their two projects that focused on collecting an oral history of past student activism at UCD, and producing a range of multi-media documentation to bring to life their findings. Part of Christopher’s work was on display in a booth on the Quad during Whole Earth Festival where an ever-developing timeline of student activism was depicted, and the video documentary Aina produced was shown at the reception, portraying many of the primary subjects relating their stories of activism on campus.

The first Green Fellows delivered and delighted beyond what any of us could have imagined. But what left the greatest impression, given that the most of us in attendance graduated from UCD at least two decades ago, or more, was the opportunity cost of the high cost of a UC education today. Specifically, the sobering way this extreme economic burden delimits today’s students’ hopes, dreams and aspirations and dampens their ability to simply enjoy what should be expansive, exploratory, and wonder-filled years.  In the time frame that most of us were at UCD, the annual fees increased from just under $630 in the 1975 to the unimaginably outrageous $4,354 by 1995. Little could we have imagined that fees would continue to escalate to $14,400 a year today (link).

Both Fellows shared their gratitude for how the funds they were awarded permitted them the significant luxury of simultaneously earning money (an imperative in the today’s era of six-figure student debt) while pursuing projects and causes of great concern to them and their communities. Without these funds, they emphasized, their discretionary effort outside class hours would have been exclusively bound to servicing the debt their education was imparting through less meaningful and impactful work.  As Poppy Davis (’87), the visionary instigator of this fund stated in the afternoon’s opening remarks, “Here on this beautiful Spring day, it’s so wonderful to look forward to these new Green Fellows and the students that are here now, and to have an opportunity to give them something that lets them have the joy and friendship and the lightheartedness that we had.” Our privilege was not lost upon us, as alumni from a less financially burdened college era. Our hope, as donors to this fund, is that it opens up the path for more UCD students to feel as hopeful as we once did here, in these rare and unique spaces of the SLLC, and that from here they cultivate and craft their vision to lead us all towards a more just and sustainable future.

To learn more about the SLLC please visit their website at https://sllc.sf.ucdavis.edu/

SLLC is actively seeking supporters’ funders and friends at https://sllc.sf.ucdavis.edu/friends-sllc This is a great piece. it is true that with sustainable living and learning communities, society can achieve prosperity and good neighbourliness