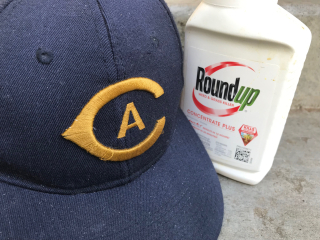 On May 14th, 2019 Janet Napolitano, President of the University of California, sent a remarkable letter to the Chancellors of all UC campuses, the Director of Lawrence Berkeley National Lab, and the CEOs of all  the UC Medical centers announcing the “temporary suspension of the use of glyphosate-based herbicides.”

Napolitano cited “concerns about possible human health and ecological hazards, as well as potential legal and reputational risks associated with this category of herbicides.”

This may be a response to the mounting scientific research linking glyphosate to cancer, or it could just be that the UC system is worried about being named as a defendant in a glyphosate lawsuit like the three Monsanto/Bayer have lost over the last two years. The most recent lawsuit found Bayer responsible for damages of 2 billion dollars.

This move to cut back on glyphosate use on the UC campuses is surely a difficult situation for the UC given its long-standing relationship with Bayer and Monsanto. For example, Bayer Crop Science partnered with the University of California, Davis to create the CoLaborator facility in West Sacramento just last year (link). Bayer has also partnered with UC SF since 2014 to open Bayer’s U.S. Innovation Center in San Francisco’s Mission Bay life sciences hub (link). 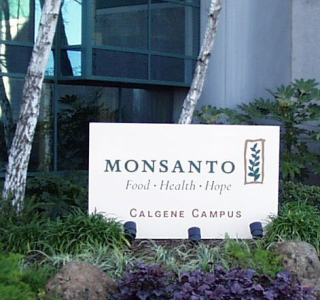 An early UC Davis link to Monsanto can be traced to 1980 when UCD professor Ray Valentine was one of the founders of Calgene with “a science advisory board from fellow scientists and other [UC Davis] faculty members,” and according to the UC Davis website “Calgene began working on genes for herbicide resistance. Eventually, this work would lead to genetically modified crops resistant to the broad spectrum weed-killer Roundup. Marketed by Monsanto, which purchased Calgene in 1996, Roundup-resistant crops such as soy beans, cotton and maize are now planted on millions of acres in the United States.” Monsanto/Calgene was located on 5th street in Davis until it moved to Woodland in 2014.

Another example is the Monsanto-sponsored student fellowship program in the UC Davis College of Biological Sciences (link). Another example of UC Davis’s work with Monsanto can be seen over many years in the UC Davis Seed Biotechnology Center annual reports which list Monsanto representatives as advisory board members. The 2017 report also notes that “CPPSI [Collaboration for Plant Pathogen Strain Identification] appreciates the continued support from founding members Bayer… [and] Monsanto.”

Monsanto, the long time manufacturer of Roundup, the most well-known glyphosate product, was purchased by Bayer in 2016 for $66 billion (link). At the time of the merger, the Sacramento Bee speculated there could be significant impacts from the many Bayer and Monsanto facilities in the Davis region as Bayer tries to realize $1.5 Billion in “total synergies,” that may merge or shutter local facilities. 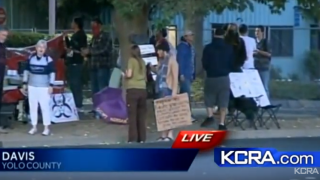 Monsanto has long been controversial in Yolo County, with protesters arrested as recently as November 2018 in front of the Woodland facility (link). There was also a protest in Woodland earlier this month (link). The protests were even more extensive during the Occupy movement when the Davis Monsanto facilities were shut down by protests in 2012 (link) (video). The Davis Enterprise reported over 100 people protested in front of the Davis Monsanto offices in September 2012.

Questions were already being asked in 1998 during the run-up to the Seattle World Trade Organization meetings regarding UC Davis signing an agreement with Monsanto and concerns over increased dominance of genetically modified seeds resistant to glyphosate world-wide. These concerns led to mobilization right here in Sacramento in late Spring 2003 during the federally sponsored WTO Ministerial Conference and Expo of Agricultural Science and Technology with actions on the UCD campus protesting Roundup-ready seeds.

Most recently students have organized Herbicide Free UC around the mission, “to stop the use of toxic herbicides across all University of California campuses.” The group started when Mackenzie and Bridget Gustafson were at beach volleyball practice at UC Berkeley and their coach cautioned them that the area around the court had just been sprayed so they should not chase balls off the court. The group has chapters at Riverside, UC Berkeley and UC Davis and together they have applied pressure and even secured grants to help fund better practices. 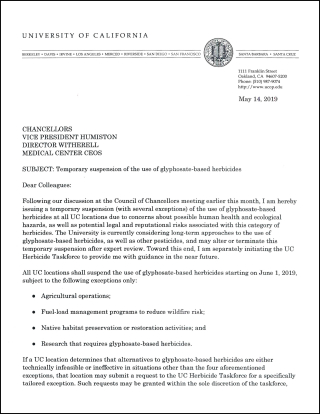 Notably, the Napolitano letter is very specific that the suspension of glyphosate use has major exceptions and can be rolled back: “The University is currently considering long-term approaches to the use of glyphosate-based herbicides, as well as other pesticides, and may alter or terminate this temporary suspension after expert review.”

The letter also provides that a “location may submit a request to the UC Herbicide Taskforce for a specifically tailored exception. Such requests may be granted within the sole discretion of the taskforce.”

The last paragraph of the letter contains 2 specific restrictions for continued glyphosate use at UC campuses:

These restrictions raise the question of whether previous policies did not require pesticides be applied by or overseen by individuals with licenses, and that personal protective equipment may not have been used while doing so. If true, sloppy past practices and procedures would increase the UC system’s exposure to personal injury lawsuits like the three Bayer/Monsanto recently lost.

Other agencies are taking bolder steps. Los Angeles County “issued a moratorium on the application of Monsanto's Roundup weed killer, citing a need for more research into its potential health and environmental effects,” according to US News. In Davis, the City Council voted to begin a three-year phase out of glyphosate in 2017 (link).

The Woodland Joint Unified School District (WJUSD) has also “indefinitely suspend the spraying of glyphosate, the key ingredient in Monsanto’s Roundup and other weedkillers” as reported by Consumer Affairs and the Woodland Coalition for Green Schools.

Dr. Grandia, who is herself a non-Hodgkin’s lymphoma survivor, (an ailment glyphosate has been linked to), has had her own run in with glyphosate and UC Davis: “on June 2, 2017, I was almost sprayed with Roundup walking into my building on the central [UC Davis] campus at 10 am. When I inquired, I was told they would return to the practice of covert spraying before 7 am.”

Dr. Grandia reports that when she “asked why they didn’t post notifications, the response I received was that they checked with the County Agricultural Commissioner and it was legal.” Dr. Grandia provided the Davisite extensive email correspondence between her and Bernie Tano, UC Davis Hazard Communication/Industrial Hygiene Specialist, that support her assertion.

Alice Beittel, who is part of a collection of students and recent UC graduates who are working to shift UC groundskeeping to organic practices, provided Davisite.org with this statement: “We are excited to hear that the UC Regents have committed to a temporary ban on glyphosate, but there is still more work to be done! We are calling for the UC Regents to eliminate all Prop 65 herbicides and commit to organic, herbicide-free groundskeeping. Our approach is rooted in working closely with our Davis groundskeeping to help support this transition and getting students involved.”

According to Alan Pryor, Chair of the local Sierra Club Yolano Group, "It's about time that UC stopped beholding itself to some of it major research funders, Monsanto and Bayer (now the new owner of Monsanto), and started looking after its workers and students and the public that it is supposed to serve. Glyphosate (the main active ingredient in the herbicide Round-Up) has been strongly implicated as a cause of Non-Hodgkins Lymphoma and is now on California's Prop 65 list of probable human carcinogens.

Pryor went on to declare “It has already resulted in billions of dollars of damages awarded under numerous lawsuits. Perhaps ever more scary, though, is that glyphosate was recently found to promote the epigenetic transgenerational inheritance of disease and pathology through germline (i.e. sperm) epimutations. In other words, it can adversely affect your grandkids and great-grandkids even if they have never been exposed to glyphosate.” Pryor provided this link to support his claim.

According to Pesticide Application Notices emailed to citizens on request, the City of Davis has not used any glyphosate in any City Park or Greenbelt in over a year and had only one application in any City Park or Greenbelt within the last 18 months. Some limited glyphosate applications are still being used by the City on street meridians, in open spaces (in the North Davis Ditch, the South Putah Creek Preserve, and the Wildhorse Golf Course ag buffer) and at the wastewater treatment plant. However, all applications of glyphosate by the City must cease by November, 2020 according to the City Council resolution in November , 2017 mandating the 3-year phaseout.

The Davis Joint Unified School District has also stopped using glyphosate as only uses weed-whackers as of last November according to the new Manager of Maintenance and Operations, Denise Brogan.