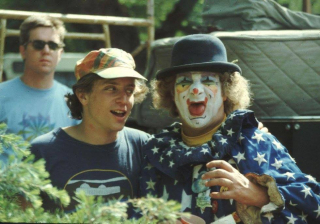 This festival was absolutely the first of its kind some 50 years ago, an art happening/educational event produced for and by students to advance alternative ideologies and enjoy enlightening music and speakers, all focused around a shared appreciation and worship of our Mother Earth home planet.  It presaged Earth Day which occurred around the globe the following year and continues to this day. In the turbulence of the late 60s, a beautiful form of community expression manifested that lives on today. I grant you the nudity and clouds of weed smoke have disappeared due to the University’s prudish conservative character, but the spirit goes on. 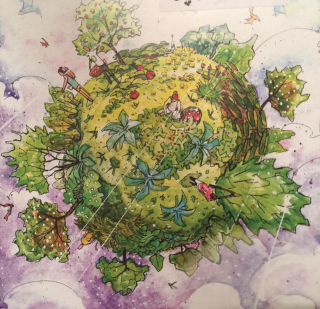 So very many similar festivals of cultural meaning have followed, from the Oregon Country Fair to Woodstock to green festivals, Earth day festivals, festivals celebrating renewable energy, simple living, permaculture, yoga, a local environmental feature such as a river or bay, and the entire rock music festival phenomena evolved from the energy and spirit of the early 1970s.

For many of us that produced it, the Whole Earth Festival meant an unprecedented opportunity to enlighten and educate our peers and the community of Davis and Northern California about vital issues of the day such as renewable energy, holistic medicine and midwifery, yoga, massage, and spiritual issues, organic farming, vegetarianism, and organic foods, resource recovery, composting and recycling. We used the green quad institutional setting of the University to raise consciousness about new values for a new era, experiential education, and how to live lighter on the planet to perpetuate all species far beyond 7 generations.

It was hard to envision the crescendo of eco calamities that face us today, but we all knew things had to change otherwise we humans were in danger, along with all the other species. We had that enlightened world view going for us. That is the case now more than ever. The wake-up bell cannot be turned off. And young people around the world via the Global Climate Strike and Sunrise Movement have heard the clarion call loud and clear.

The crafts sold at Whole Earth allowed those involved in creative cottage industry an outlet to sell their wares and produced needed income (for the Festival is not funded by the students of UCD, it is a break even event.) that funded the music and speakers and the ever increasing university costs such as police, Aggie hosts, the engineers and electricians to hook up the sound systems and food booth power, and environmental health and safety. All these official costs have escalated, and the students working to produce the weekend earn next to nothing compared to the cops who wander around uselessly for three days and earn overtime. I always thought their UCD salaries should cover their presence. But I digress.

The Festival’s waste free view and program was way ahead of the curve. Rather than create tons of trash the Festival started using reusable dishes and cups many years ago and through meticulous trash separation, recover more than 95 percent of waste for composting and recycling. Many festivals followed this example, few have come close to this level of consciousness. WEF remains a stellar leader in this program.

At its heart the Festival is about social change and the social changes I have seen take root in the hearts and souls of the kids who have produced and continue to produce the event. To have a shared common vision for a positive spirited high energy event, and then work to bring off that vision has created both lifetime friendships and personal and professional growth in those individuals who have been involved. That has been my experience.

It has been magic for those who have taken the plunge — and there have been hundreds of kids who have come of age co-producing this springtime celebration whose lives were permanently altered for the better. They rather, we received something no university classroom, course or degree program could ever have provided. 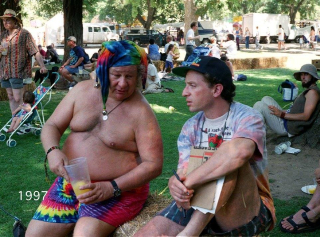 Photos of David Kupfer with Wavy Gravy by Daniel Ng. Wavy and David both served as the festival emcees for many years.

David Kupfer, thanks for this great piece. It gives me, as someone who came to Davis only 12 years ago, a better understanding of the event and its origins. And its importance.

WEF has a special place in my heart. I began attending in the early years. The first festival of the spring. A reunion of family and friends. I received many Mom's day presents, as my kids loved to shop the wonderful handmade crafts. I will be there tomorrow with bells on. Thank you David for this well written tribute & to all the WEF alumuni: you created a very special and important event.

My son, Ezra, who turns 45 this year,
Always asked to attend “the whole earth especiaval”— where we found midwives to braid our hair (and attend our births), tie dyes and jewelry to dress our bodies, and The Green Tortoise to travel to the National Parks, Alaska, and Yosemite. Thanks to the folks who have provided all this all these years.

Thank You, David, For gatherings such as Whole Earth Festival to persist it is responsible to people like you and your efforts,

they shall persist even with the limitations of Covid-19 because they cater to nature and the spirit of love on our planet,

they work in harmony with life and teach all of us that we do not have to live in a commercialized environment and there is more to life than making the proverbial buck,

It is and always will be a great event to bring the entire family and to get children started in the reverence and respect of our planet, thanks again for your inciteful efforts.