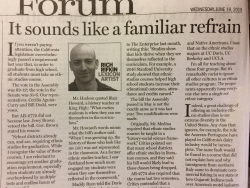 In arguing against ethnic studies, he inadvertently demonstrates the need for it.

When I was in college, I saw little need for Women’s Studies courses.  My thinking was that discussion of important contributions from women should be included throughout the curriculum.

Some thirty-five years later, they still aren’t.  Neither are the contributions of racial minorities.  Yet some people still sing the same song that I song in college.  They have failed to learn what I  learned the hard way – that change doesn’t just happen on its own, and that sometimes you need what might seem like an imperfect solution in the interim in order to get to the point where you can implement a better solution.

We need ethnic studies now.  We’re not at the point where we can just integrate the work of racial minorities into the curriculum.  I wish we were there yet, but we’re not.

In a recent editorial in the Davis Enterprise, Rich Rifkin disagrees.  He says that “the ethnic studies lobby in Davis (and beyond) has been proselytizing” in favor of a bill requiring an ethnic studies course for high school graduation, but that “[r]ather than forcing students to take a segregated class, ethnic studies should be integrated into existing courses.”  In coming to this conclusion, though, he inadvertently shows, in part, why we need ethnic studies courses.

Rifkin surmises that “ethnic studies will be limited to teaching about Latinos, African-Americans, Asians and Native Americans” based “ the ethnic studies majors at UC Davis, UC Berkeley and UCLA.”  Let’s suppose that he’s right about that.  Would that be a bad thing?

He thinks it is.  He says that although he is “all for teaching about those four groups” that “it’s remarkably racist to ignore all other cultures in an ethnic studies program.”  He says that such a course would leave out topics such as “the role the Azorean-Portuguese have played in California’s dairy industry” and “how and why immigrants from northern Italy came to dominate commercial fishing in our state.”

But that is to use a very simplistic definition of racism, one that does not take into account who are the oppressed peoples and the systems that maintain that oppression.  In contemporary U.S. society, descendants from Portugal and Italy are not oppressed and they do not suffer from systematic racial injustice.  Descendants of people from Latin America, Africa, and Asia, as well as indigenous Americans, do.

An ethnic studies course would teach a more sophisticated definition of racism that would show students that prejudice changes over time and that not all race-based prejudice is properly called “racism.”

In a second error, Rifkin quotes poet and veteran civil rights activist Maya Angelou, who passed away in 2014, as saying, “Won’t it be wonderful when black history and native American history and Jewish history and all of U.S. history is taught from one book? Just U.S. history.”  He somehow thinks this quote supports his conclusion. I’ve had trouble tracking down the original source of this quote, but I’m pretty sure that it doesn’t mean what he thinks it means.  As it appears in 2012 article in the Guardian (from what I can tell, the source from which most other quotes stem), the point she is making is that she wishes we didn’t need Black History Month, but unfortunately, we do.

An ethnic studies course would provide historical and societal context for its content, not relying on short quips and quotes taken out of context.

Perhaps Rich Rifkin should take an ethnic studies course.  They are, after all, not just for racial minorities to find people in history they can identify with (as he seems to suggest) but for people of all races to learn to think about race, racism, and the contributions of racial minorities in a more sophisticated and thoughtful way.

Rifkin’s argument that an ethnic studies course that doesn’t cover all ethnic groups is racist is absurd. (There are, for example, over 200 languages spoken in California.) It’s a rationale for doing nothing.

He also argues that “[r]ather than forcing students to take a segregated class, ethnic studies should be integrated into existing courses.” The implication that the two approaches are mutually exclusive is mistaken. Both can and should be done.

Eric, good points. On the second point, I certainly didn't mean to imply that it was one or the other, but it's a lot easier to add an ethnic studies course than it is to incorporate the material throughout the curriculum, so the hope is that the one helps to pave the way for the other, as faculty, students, and citizens get used to hearing more about the achievements of people who aren't white men. And, arguably ethnic studies does something distinctive anyway, necessary as long as we continue to have a racist society with systems in place that reinforce that racism. So, I agree. Both.

What systems are in place that reinforce racism? In addition to adding ethnic studies, I'd like to know more about the content of classes in Civics, American History, International Relations or other such subjects taught in our schools. Maybe it's time this content is re-examined and re-presented?

In American History/Civics, how about the concept of "corporate personhood" established by the Supreme Court in 1886 in Santa Clara County v. Southern Pacific Rail Road based on the 14th Amendment as a result of the Civil War. This set the stage for a series of Supreme Court decisions that protected corporate rights, money and power over the rights of communities and people. It was the foundation for the Supreme Court ruling in First National Bank of Boston v. Bellotti (1978) that corporations as persons had First Amendment rights to free speech which led to a series of Supreme Court decisions to systematically strike down campaign finance laws. The historical context and consequence of these two decisions deserves as much attention in American History/Civics as in Ethnic Studies.

What systems are in place that reinforce racism? Bank lending, apartment renting and home buying, police treatment and incarceration, employment, and education come to mind. There are racial disparities in all of these areas that are historical and continue to be perpetuated in spite of any individual's good intentions.

As for corporate personhood, yes, that would be a good topic too. Echoing Eric above, its not an either/or but a both.

It seems like you want the course to study the history of ethnic groups where they collide with other ethnic groups (specifically white). UCD requires a course in Domestic Diversity, but this includes a wide array of course choices, including standard history courses. Is your definition of "ethnic studies" only include content covering oppression and discrimination? My background is Irish and Irish history is full of oppression and discrimination. Since Irish are currently considered white, would this not satisfy under ethnic studies? Also, students are already being asked to take so many courses. Which course would be removed to make room for another social science course or elective prohibited due to the increase in graduation requirements? Wouldn't it be easier to include this curriculum into the current 3 required social studies classes, the 1 American government class, and the 4 courses of English?

Sharla, I would put the point a little differently. I would want the course to study the groups that are currently undergoing discrimination in the U.S. because that is the area of greatest need for our students. Of course, that is not to deny that other groups in other places and other times have undergone discrimination, nor is it to deny that there are other ethnic groups worthy of study. It is to say what I think our students most need, now.

As for integrating the material into other courses, as I said in the comments above, I am all for that. But it's harder than you think. Instead of training one or a few teachers, you have to train all the teachers. Some teachers may feel they are not qualified or don't know that material. Others may object to the material or feel that it is pushing out other material they want to cover. Basically, it's like herding cats -- and I speak from experience from attempts to try to diversify philosophy curricula, which are still very much dominated by Western white male perspectives. Ultimately, though, in sympathy with what Maya Angelou actually said (rather than what Rifkin implies that she said), I hope to reach the day when more diverse material is covered as a matter of course, and there is no need to particularly emphasize the contributions of particular groups. That will happen when we've done a better job eliminating systematic racism in the U.S.