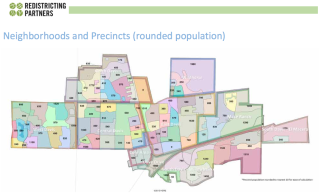 How to form districts and how many, how to select Mayor

Last night at its regular meeting, the Davis City Council began the community discussion of how we should move forward with district elections for the Council, the decision to do so having already been made.  No decisions were made and no votes were taken, although some preliminary preferences were expressed by Councilmembers.

Here are just some quick thoughts of mine after watching the livestream of the meeting from home.  No doubt my views will evolve as the process continues.

First, if you missed the meeting, I highly recommend watching the presentation from demographer Paul Mitchell; videos from meetings are posted here, slides from his presentation are available here.  It was clear and informative, including explanations of what constitutes a community of interest and the idea of being functionally contiguous.

Mitchell also emphasized that districts must be functionally contiguous. My understanding of this is that you must be able to get to every point in the district from every other point in the district without leaving the district.  So, for example, for North Davis to be a district that includes Wildhorse, Covell Blvd would have to be included, along with justification that it constitutes a community of interest.  Note that it is not enough to be geographically adjacent; you have to be able to “get there from here.”

Councilmembers seemed interested in forming 5 or 7 districts, with some Councilmembers leaning one way or the other, and some still undecided.  Districts need to be roughly equal in numbers, as determined by the last census (2010, which counted 65,622 people).  With 5 districts, each district would be around 13,000 people in size.  The number of districts to be formed will be decided at a future meeting.  Here I agree with Mayor Pro Tem Gloria Partida that it makes sense to wait until we see some proposed districts before deciding on which number is appropriate.

Another issue that Council will have to decide is how to choose a Mayor.  There seemed to be little interest among Councilmembers in having a Mayor elected at large, in (large?) part because of worries that it would run afoul of the very law that led to the change to district elections in the first place.  That leaves two options: 1) a Mayor that rotates between districts and 2) a Mayor that is chosen by Councilmembers.

I didn’t get the sense that the Council was leading strongly one way or the other, but I think that the first option is far preferable.  In the past (not with any members of the current Council), Mayors improperly used their power to cut short the commentary of minority views on Council.  If the Mayor is elected by members of Council, that is too likely to result in the majority view always been Mayor.  The whole point of district elections (whatever one thinks of them) is to give more voice to minority views.  Having the Mayor rotate between districts is a far fairer procedure, in my opinion.

Implied in my previous paragraph is the sense that the elected person from a district is in some sense representing people of that district.  Mitchell seemed to downplay this, suggesting that it is only on Election Day that districts matter; otherwise, all Councilmembers represent the entire City. 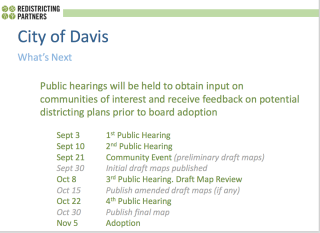 I think Mitchell’s view here is overly idealistic.  A Councilmember who does not represent the interests of their district will likely find themselves not re-elected.  As an analogy, consider our Congressperson, John Garamendi.  Yes, of course we hope and expect that he will represent the interests of the entire country, but we also expect that he will represent the particular interests of our district, the 3rd District of California.  Similarly, we should expect Councilmembers from a district to represent both the entire City and the district. After all, isn’t that the point of district elections?  (Again, regardless of what one thinks of them – I don’t see any reason to discuss their pros and cons given that the switch is a done deal).  Thus, this is something we should keep in mind while drawing districts, something the City is also asking for Citizen input on (see schedule at right).

The next meeting to further discuss district elections will be on September 10 at 6:30 PM in the Council Chambers.  Stay tuned!

Maybe I have missed something, but in all the discussion re the city switching to district elections, I have seen nothing about one possible/probable major benefit (s) which is the reason that many cities and towns both the same size and larger opted for district elections a long time ago: Quite simply it makes it easier, especially for a non-incumbent, to run for the council because s/he will not have to raise the often huge sums necessary to run for a city at large office as opposed to one for a district that is, in this case, one seventh the size of the city.

To the best of my recollection, and sort of educatedly guessing (I stand to be given more exact numbers), there are circa 40,000 registered voters in Davis. Now for anyone to run for office seriously this required mass campaign literature mailings (at least once) to all these voters (to say nothing of trying to cover the city with campaign placards), or at least all likely voters across the city, and this costs serious money, In addition, of course, it was hard to impossible for a candidate to knock on every door or in some way make direct contact with all voters. Now, assuming there are seven districts, a candidate will only have to campaign for circa 5,800 voters, which is quite enough.

It is therefore much more feasible for a serious candidate, in terms of the fund raising barrier, to run for city council. I can well recall when Lamar Heystek won election to the Council in 2006, and ended up with campaign debts of circa $35,000 which burdened him for years. I am sure that it is true without digging out the numbers that, incumbents especially, have run successful city-wide campaigns since and before for much less. But the economic barriers to candidacy were formidable.

And let us not forget our history (as almost all of us do): During the Progressive era, (1900-1920), this was one of the main reasons that Progressives (and quite a number in the union movement who did not identify themselves as Progressives) demanded and obtained district elections. The Progressives further argued the case for district elections on the grounds that a candidate running for office would need to raise less money from “special interests.”

Now whoever heard of firefighters, police, or developers bundling money to try and influence an election??? Finally, the Progressives argued that district elections make a council member more responsive to his/her constituency given its small size. And, relatedly, that a constituent might even be able to have some kind of face to face relationship or contact with their council member. These are the arguments (in addition to the representation of minorities) that advocates of district elections have been making ever since the Progressive Era. I think I would be correct historically in saying that not until the 1960s did many people make the very valid argument that district elections would give minorities better representation.

On all of the above grounds, I have long argued for district elections in the company of such people as diverse as Bob Dunning and Sue Greenwald, and I welcome he move to district elections and hope it will encourage more and better candidates to run for council. And to the College Republicans and Matt Rexroad I say: “be careful what you wish for.”

With respect to Bob Dunning, he has evidently changed his position, and he recently wrote: “There was a time when I felt district elections would be a good thing for Davis.... There may come a day when Davis grows so large that district elections become the fairest way to run things.
But with the severe no-growth mentality in town, that day appears to be far, far away.” Very interesting argument Bob!

Thanks for your comments, Dan. In fairness to the Councilmembers, a number of them did mention that one benefit of district elections was to make it easier for people to run. But none of them emphasized the financial aspect as thoroughly and as eloquently as you do here.

I submitted comments to the City district elections website. In summary, I said that the mayor should rotate among the districts. My experience with this model is the Sacramento County Board of Supervisors. The chair position rotates among the 5 supervisors on an annual basis. This approach takes "politics" out of the equation, and from my experience works very well. Plus, in a council-manager form of governance, the real day-to-day work of running the city rests with the city manager. I recall that when Jerry Brown was elected Mayor of Oakland, the city manager counseled that Jerry should focus on promoting the 3 public policy issues most of interest to him, and let the city manager focus on running the city. Jerry heeded that advice, and the 2 of them went on to have a productive relationship.

In terms of "community of interest," I suggested that a senior citizens area is forming near the intersection of Covell and Shasta Drive, which includes the current URC and the future Bretton Woods (aka West Davis Active Adult Community). I also noted that in our frequent walks in the west Davis area (including Shasta Drive, Lake and Covell and the multi-use paths), we notice many senior citizens. This informal observation is admittedly not scientific, but to the extent it has been observed I think one could argue that a senior citizen "community of interest" exists in the area and will only increase as Bretton Woods evolves.

Thanks, Greg. Glad you agree on the rotation of mayors. It's helpful to have a working model to point to.

I think you're right that the manager handles the day-to-day running of the City, but in my opinion some Davis Mayors have not kept close enough contact with the Mayor and the staff, to the point where it feels like staff is driving the direction of the City rather than the CC.

That's interesting about a potential community of interest near Covell and Shasta. I can see the possibility there, especially since concentrations of seniors have already been explicitly mentioned as candidates for communities of interest, although I don't have enough information to say anything about this area myself. It does make me wonder, though. My own neighborhood is quite a mix of seniors, middle-aged people, and young families, with a slow rotation as people pass away/move out and younger people move in. I wonder if that sort of diversity counts as a community of interest? Or does everyone have to be the same in some respect?