Davisites, it’s time to draw your district maps
Davis rejected the MRAP - should it buy an ARV instead?

UCD grants to homeless students treat the symptom, not the cause 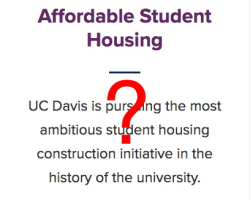 A recent article described UCD grants to homeless students. This program treats the symptom and not the cause: UCD’s continued failure to construct affordable campus housing matching enrollment growth.

Last year the Chancellor appointed an Affordable Student Housing Task Force, which was guided by the assumption that improving housing affordability “…is part of the campus’s fundamental responsibility to students.” The June 2018 task force report had 15 recommendations, some which would directly boost housing affordability.

Unfortunately, UCD has seemingly ignored the most meaningful recommendations, including:

Despite resolutions adopted by the City and Yolo County, the 2018 LRDP aims to house no more than 48% of the 39,000 students the LRDP expects in 2010-31. It also does nothing to address UCD’s failure to meet the on-campus housing goals of the Regents’ 2002 student housing report and the 2003 LRDP. If those goals had been met, perhaps there would be fewer poorly housed students today.