10 things you need to know about the UCD-City-County "Town Hall" that are not being reported in other places. 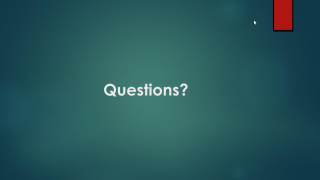 On Thursday 10/17 UCD, the City of Davis, and the Yolo County Board of Supervisors held a public meeting to discuss housing. Both the Enterprise and the Vanguard blog have written about it, but here is a list of 10 significant or interesting points that have been left out of those articles.

1) This was not a “Town Hall” style meeting despite being characterized as such (see May, Lee and Saylor’s oped ). This meeting was held in a traditional public meeting format, with limited public comments in the beginning, then speeches made by the panelists from UCD, City of Davis and Yolo County Supervisors. The last speakers final slide said "Questions?" in bold letters, but was quickly taken off the screen. At the end of the meeting Vice Chancellor Ratcliff noted the meeting was ending early. At that point I very politely asked if the panel would be willing to take questions. VC Ratcliff stated that no questions would be taken. By comparison the October 14 Congressman Garamendi Town Hall had over 1½ hours of Q & A.

2) Very little notice was given for the meeting. It was only posted to the Davis Enterprise on Tuesday 10/15 and the e-notification from the City also only went out on Tuesday. This extremely short notice is legal since the Brown Act only requires 24 hour advance notice for a special meeting, but disappointment has been expressed by many who did not know about the meeting until after the fact. The meeting was also in a remote less known location on campus. By comparison the Garamendi town hall was announced 19 days in advance and held in a central location. 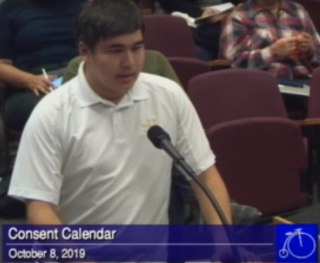 3) No students spoke during public comment, and there may not have even been any students at the meeting. This seems strange given that students demanding more housing have been a regular feature of Davis City Council meetings, and the only published topic of the meeting was housing.

4) The meeting was well attended by the development and real-estate community. Most notably all the big players from the Nishi team were there (John Witcombe, Sandy Whitcombe and Tim Ruff).

5) The Mayor basically declared that the housing crisis was over, even though none of the recently approved big student housing projects are available for rent yet. (see the Mayor's 1 slide) 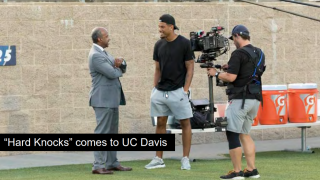 6) Chancellor May spent most of his time promoting UC Davis, and boasting about its accomplishments. He even told about how he almost was included in an episode of HBO’s “Hard Knocks.” The Chancellor never mentioned what the UCD housing task force recommended, or that UCD is not following those recommendations. See this Greg Rowe article for more details.

7) City officials spent a significant portion of their time complimenting Chancellor May and telling him he was doing a great job. 8) Supervisor Saylor gave a presentation that included a slide announcing the addition of a new “managed” lane to the Causeway and a separate slide about a new electric bus that will be running from UCD to the UCD Medical center.  (Aggie electric bus article) 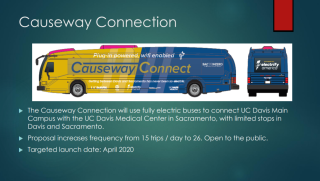 9) Council member Carson talked about his 2003 lawsuit against UCD that delayed the building of housing at West Village and ultimately dissuaded UCD from connecting directly to Russell Blvd from the West Village development, though Carson told Chancellor May that UCD won, “fair and square.”

10) Oddly there were a lot of security guards at the very mild-mannered event. 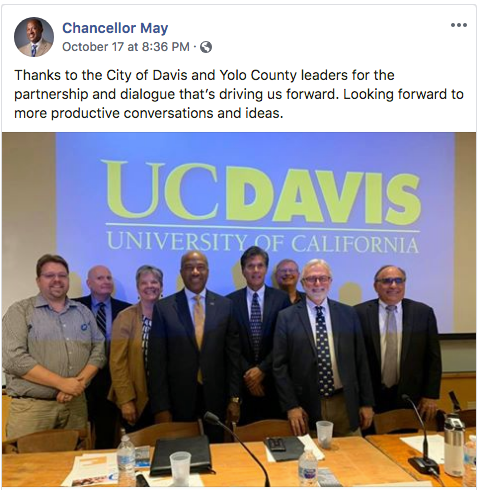 A pleasant note and photo from Chancellor May's Facebook page.

Thanks for this great article Colin, to fill folks in on what was not covered in other media. This is especially needed because this "Town Hall" meeting was not even held in town at a convenient location for the community to attend, but it was held at a remote location on campus at an inconvenient time for working people to get to it at 6:30 pm.

If it had to be on campus for some reason why wasn't it held at a more convenient and accessible location for the community and why not at 7:30 pm when people could actually make it to the meeting?

The fact that the meeting was ended early as well before the 1.5 hours was up and that no questions were allowed either, makes it pretty clear that UCD really did not want a good turnout from the community at this meeting to address UCD on the housing issues.

Finally, for folks that could not make it last Thursday, tomorrow, Tuesday Oct. 22 is a rare opportunity to address UCD at City Council at Community Chambers where UCD will be presenting their "UCD financial overview”. Maybe they can explain why they are prioritizing a $40 million “Sports Performance Center” over the desperate need for far more on-campus student housing needed now.

It would be important to testify at the Council meeting for the need for far more UCD on-campus student housing then the MOU proposes. Also, for higher density housing and define a complete, not a partial timeline for any beds being added on campus. There is no timeline defined for over 3,000 beds UCD claims it will provide “sometime" before 2033.

UCD is the largest UC with over 5,400 acres and a 900-acre core campus. There is no excuse why it can’t provide at least as much on-campus housing as the other campuses. UCD is only willing to try to provide 48%, rather than 50% on-campus student housing which is around 800 beds less than the minimum that they should. 800 beds would be another 1.5X the enormous Sterling Apts. complex on Fifth St. near Pole Line.

So, folks should come and testify tomorrow (the meeting starts at 6pm when the visiting Planning Commission will discuss housing, including student housing).

General Public comment is at 7:10 pm for items not on the agenda or for folks who cannot stay for the item to speak about.

Also, the final decision on the District Elections will also be decided tomorrow night, so this is your last chance to testify on that too.

Here is the agenda link:

I would like to thank Colin for his report, and add two other points and comments.

11. Had the public comment come after the panelists' presentations, rather than following the City Council model, we could have asked follow-up questions to what the Chancellor, the County Supervisors and City Council members said to get more information and facts.

At least before City Council meetings, documents are available to the public on which they can base presentations. I guess no one really wanted informed questions. In fact, it was a Catch-22 situation.

A. What needed to be clarified was over the next 5--8 years when the "student housing" will be build out in the city and on campus, what are the real figures for student housing going to add up to for freshman and others. When Brett Lee says we have solved the student housing issue, this is only for those that UCD even intends to ever house on campus. And this does not address the real need overall of students. So let's really be honest about need; what exactly is being built inthe city and on campus and for which category of student. It is easy to just say students and think the problem is solved.

12. Supervisor Provenza was the only person who mentioned that there are other unmet housing needs - that is not only for faculty, staff and workers on campus, but for others in Davis moving up or down, and those who might just happen to want to live in Davis. Hasn't that always been the problem: build it and they will come. The Cannery has a proportion of folks who moved here from elsewhere as well as investors.

Provenza's comment is an admission that while some of the housing that's been built has been "sold" to us a suitable for different types of needs, singles, married couples, families, etc, but the configuration of beds with bathroom in a pod is just for students.

Finally, had questions come at the end, I would have strongly spoken back to Mayor Brett Lee who said that those of who have opposed projects either by referendum of lawsuit should bear the blame for lack of completed housing projects to date to meet city needs.

If Dan Carson can get away with a lawsuit against West Davis that delayed the building because of neighbors concerns of traffic impacts on Russell that eventually led to UCD reconfiguring access, then isn't that exactly what many of us have been engaged in doing: that is: working to improve plans to make them "better," whether traffic, affordability, green as can be, etc.? I am tired of the the NIMBY label being used to tar and feather me and others and, often, I might add quite selectively. I don't see The Trackside folks being as maligned as some of the rest of us.

Another commenter recently noted the connections between some students (including UCD College Democrats) and development interests. This makes it difficult for me to view their concerns as legitimate - especially when none apparently showed up for this meeting. Even more so when some advocate for ARC, which supposedly won't have any student-intended housing.

Regarding Nancy's comment, I see some truth in it regarding the "Trackside folks". However, since the 4-story proposal still seems too large considering the surrounding homes, perhaps a better term is "Not in Anyone's Backyard". Or better yet, "no one gets thrown under the bus", as someone once told me.

I couldn't care less about someone calling me a NIMBY. I'm more concerned about sprawl, regardless. There is obvious hypocrisy regarding some who claim to be highly concerned about global warming (or traffic for that matter), while simultaneously pushing for a development that has 4,340 parking spaces, for example. How anyone can reconcile those concerns is beyond me.

Ron, I don’t care personally about be called a NIMBY. I object to that term being used to dismiss and diminish those making the case for better planning and projects in the hope of shutting down reasoned discussion and even, perhaps, compromise.

Me too, Nancy. But I sometimes laugh at this point, when I hear the term. It's lost a lot of initial perceived effectiveness.

I really don't see any way to avoid personal attacks, when significant amounts of money are involved. Unfortunately, it's part of the overall financial/political system that we have.

To me, the term "NIMBY" might (legitimately) refer to someone who opposes a particular development in their own neighborhood, but are willing to support it at another location - where it would impact someone else (and/or would compromise the city as a whole).