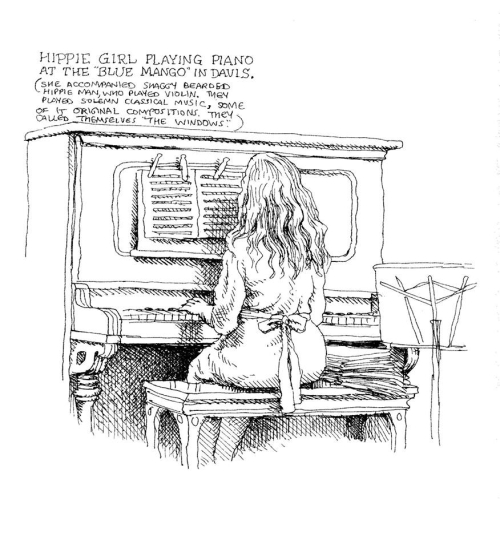 A 40th Anniversary Celebration of the Blue Mango Cooperative Restaurant & Coffeehouse will take place at the Davis Odd Fellows Hall, 415 Second Street, on Saturday, October 19, 2019, from 6pm until 10pm. A group of founding members are hosting a Vegetarian Potluck and Live Music to accompany a reunion of workers, musicians, artists and community members commemorating the Blue Mango (1979-1994). For information or to RSVP contact mango40th@gmail.com. *

The Blue Mango Cooperative was incorporated as a workers cooperative on August 24, 1979, by a group of Davis residents associated with the Fly By Night Dance & Music Troupe (1978-1980). The Blue Mango Restaurant & Coffeehouse opened on October 19, 1979, and became a cultural institution over the next fifteen years, employing hundreds of worker-owners, serving nutritious vegetarian cuisine (mostly organic when organic food was a novelty), and providing a lively venue for hundreds of musicians, artists and activists. The collective defined its purpose as promoting nourishment, consciousness and creativity.

Musicians playing at the event are primarily those who began their musical careers on the Blue Mango Restaurant & Coffeehouse stage. The Rural Sophisticates, performing jazz & dance music of the 1920s & 1930s, was formed in 1981 as a merging of the first Blue Mango house band (Ken Kemmerling, Julie Partansky, Tom Arons, Keith Cary & Bill Cavins) with two Cheap Suit Serenaders (R. Crumb & Bob Armstrong). Heidi Bekebrede became the featured vocalist in 1985, and Ted Fontaine and Bill Scholer later joined as replacements for Cary and Crumb. (Arons, Crumb and Partansky will not be attending the October 19 event, other than in spirit.)

Bill Scholer and Jan Peters, who went on to become distinguished professional musicians, were prominent at the Blue Mango Coffeehouse and Alley Dances in the mid- to late 1980s. The Bill Scholer & Jan Peters Reunion Band will close the show on October 19, and will also be featured on the previous evening, October 18, 6-9pm, at a special music concert honoring the Blue Mango, hosted by KDRT 95.7 FM. This event will be held on the patio of Parkside Davis at 330 G Street, the original site of the Blue Mango Restaurant. A portion of Friday evening's proceeds will be donated to KDRT, as part of the 2019 Fall Fundraising events celebrating 15 years of grassroots community radio.

Bob Wren and Donna Jury were in-house musicians at the Blue Mango from 1984 to 1994, playing as Windows, performing Baroque & folk music on Tuesday evenings, and International music on Sunday evenings to accompany the Sunday International Dinners, cuisine and music from over 32 countries.

David Carey was an original Fly By Night musician, along with Ken Kemmerling, in 1978. He played drums in a jazz quartet with Kemmerling, Julie Partansky and Tom Arons on the opening night of the Blue Mango Coffeehouse on October 19, 1979.

Bill Cavins was proprietor of The Ganesh Fix-It Shop from 1973 to 2015. He was a principal dancer, along with leader Phil Gross, in the Fly By Night Dance Troupe (1978-1980), and a cosigner of the incorporation papers of the Blue Mango Cooperative Inc, serving as interim president of the board of directors. Bill was guest editor of the 1981 Aprils Fools edition of the Winds of Change monthly newspaper (1979-1984) when he was recruited to play at a benefit for the paper with the Winds of Change All-Stars on Spring Equinox, 1981, at the Winters Firehouse. The Winds of Change All-Stars became the Rural Sophisticates.

David Campos emigrated to this country from Mexico and found a welcoming home in Davis and the Blue Mango. He played music there, billed as "Roots Music". David is a founding member of the Latin and World band Zapato Viejo, performing Latin American songs with traditional and contemporary instruments.

Bob Armstrong is a multi-instrumentalist and a noted artist and cartoonist. He was a founding member of the Cheap Suit Serenaders, along with R. Crumb, in the mid-1970s. He was the leader of Bo Trong and the Thin Men from Venus, formed in 1987 with four of the original Rural Sophisticates.

Skip Simmons is a world-renown expert repairman of vintage amps (Skip Simmons Amp Repair) and was the drummer with Bo Trong and the Thin Men From Venus (1987-1994).

Casey MacGill is a multi-instrumentalist, well known as a master vintage jazz artist based in Seattle, performing authentic 1930s-style music on cornet, ukulele, piano and vocals.

Dick Livingston, jazz pianist extraordinaire, was a highly regarded civics teacher at Davis High School for many years, during which time he performed at the Blue Mango with the Dick Livingston Quartet, along with acclaimed musicians Chris Webster and Gordon Beadle (both DHS students at the time), Keith Cary and Rich Livingston. Dick was also the campaign manager for Julie Partansky's two successful Davis City Council campaigns, which culminated in Julie's term as Mayor of Davis in 1998 - 2000.

* The Odd Fellows will run a no-host, cash-only bar. Tip buckets will be available for donations to musicians and to defray costs of renting the hall. 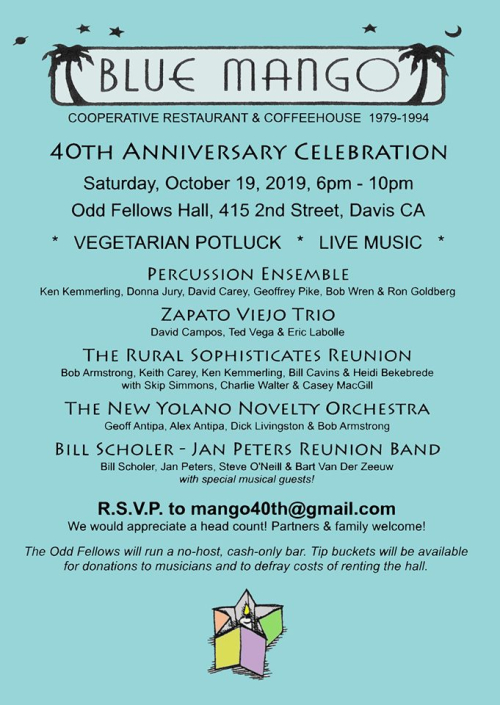 Below is a list of over 300 (!) music acts that played at the Blue Mango between 1979 and 1990. This was put together by Ken Kemmerling. THIS LIST IS INCOMPLETE, so please let Ken know of other acts that performed there, especially after 1989. Thanks!

Blue Mango was an inspired restaurant and venue. It was where my niece, Savannah Scott, made her impromptu singing debut when she was about 3 years old, singing kid songs and taking requests from the audience. She went on to perform with Davis Musical Theater, the Chautauqua Playhouse, and performed locally in light opera. Currently, she is in her final year in the Louisiana State University opera program. And to think, her beautiful soprano voice was first heard publicy at Blue Mango. Thank you for giving a very young Savannah a chance, and for all the years of wonderful food and music.

Our folk band performed several times at Blue Mango. Traveling Light and perhaps earlier as Oasis. Beth Valentine was a super vocalist, guitar player, and composer.
Jim Malloy(www.meditationcenter.com) played flute, guitar, sang, and also composed. I, John St. Pierre( Traveling Light CD) played guitar, sang, and composed.
Those were great days. We loved playing, eating, and, meeting the good people there. I believe we performed there in the early 80's. We all lived in Sacramento and performed at many places including Cal-Expo Fair. Jim and Beth have a music video on Youtube, may be hard to find. Ask Jim. He has directions.
Namaste Shanti
John St. Pierre