As the fires rage and the blackouts continue, Newsom ducks

The guv sounds tough -- but he has no plan. And he's ignoring the only (obvious) solution to the current and future crisis. 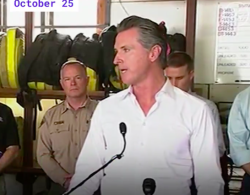 Gav talks tough about PG&E — until it comes to solutions.

Gov. Gavin Newsom is sounding all harsh and tough toward PG&E as Northern California burns out of control again and the blackouts continue.

At a press event that he promoted on Twitter, Newsom said that PG&E’s “years of greed, years of mismanagement, years and years of putting shareholders over people are over.”

Watch the video: It’s classic Newsom. “We will hold them to account,” he says. “We will restructure” the company when it gets out of bankruptcy.

How is that “restructuring” going to work if PG&E remains a privately owned utility that sets up its own corporate structure? How are we going to “hold to account” a company when it’s already in total collapse – and Newsom has no plan to address that except to ask Warren Buffett to buy it?

Bernie Sanders said yesterday that it’s time for the nation to think about turning all of the private utilities into public entities. Why Newsom won’t even talk about that is a disgrace.

The future of energy in the world is electricity. If we’re going to save the planet, we need to stop using fossil fuels – and that means pretty much everything is going to have to run on electricity. And that electricity will have to be generated from renewable sources.

In an era of climate change in California, we’re also going to have to transition from an era where power is generated in bulk in a few big plants and transmitted at high voltage for great distances across above-ground lines.

That means more local, distributed generation – solar panels on every roof, with locally controlled grids and safe, modern, underground lines that are not going to fall over and start fires when the wind blows. Small and mid-size renewable generation facilities near the cities where the power is used.

None of that will ever happen as long as PG&E is a private company. Because all of those things undermine PG&E’s basic business plan and would make it far less profitable. The CEO of PG&E doesn’t work for the public; the CEO of PG&E works to bring maximum value to the shareholders.

That model no longer works. It’s devastating to large parts of the state, where there is no longer reliable power and fires started by lines that were poorly maintained (while PG&E execs got big bonuses) are raging.

I am writing this at 8pm PST on Oct. 28, 2019. Right now, the entire market capitalization of PG&E is 2.01 billion. That’s less than Mayor London Breed has offered for just San Francisco’s system.

If Newsom had any interest in solving the energy and fire crisis, he could have the state – not Warren Buffett, who will be looking to cut costs and bring in profits – buy the whole company right now. There’s $2 billion surplus in the state budget. Revenue bonds for that amount would cost around $60 million or $70 million a year – and PG&E’s operating revenue last year was $16 billion. Earnings from operations (not counting the liabilities of the fires that the company caused) were more than $2 billion.

That buys a lot of solar panels.

Look: Either the ratepayers or the taxpayers – that’s us – are going to be on the hook for the cost of the fires and PG&E’s liability anyway. Why not get the benefits – the chance to build a long-term, stable, renewable energy system in the state – when we can do that for almost nothing?

Memo to Gavin: Quit bloviating and take action. Buy PG&E (or seize its assets by eminent domain), break it up and give it to the public-power agencies that could fairly quickly ramp up to run it. Sacramento Municipal Utilities District could take much of the northern part of the state. There’s already a Marin Clean Energy system that could expand to run that county’s system. San Francisco is ready to take over local operations (and we could add in much of the Peninsula). There’s an East Bay Municipal Utilities District.

It would be a bit complex – but nothing the state and local agencies couldn’t handle. And then we can spend all the money the PG&E diverts as executive bonuses and profits on making sure that the lights stay on the state doesn’t burn.

Gav is the gov who promised “bold” leadership and solutions. This one is pretty obvious.

This article first appeared on 48hills. It has been reprinted with permission of the author.