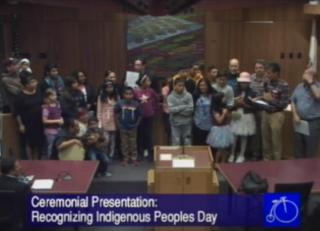 On Monday October 14, Davis California marks Indigenous Peoples Day for the first time, replacing Columbus Day. Davis’ Native Family Network welcomed the decision by the City of Davis to celebrate and honor Native American and indigenous nations and the rich cultural history which represent the foundation of today’s society.

In celebrating Indigenous Peoples Day, Davis will join a growing number of cities and communities marking the day across the U.S. including Washington D.C., Seattle, San Francisco and Denver. Over 100 cities across the U.S. have moved to replace Columbus Day on the second Monday of October.

Indigenous People’s Day was first proposed in 1977 at the United Nations’ International Conference on Discrimination Against Indigenous Populations in the Americas to proclaim and celebrate indigenous cultures, values, land and identity.

Davis decided to mark Indigenous Peoples Day on Tuesday, October 8, 2019 in order to recognize the achievements of indigenous nations all across the western hemisphere.

This year at the 52nd annual Native American Day in Sacramento, California Governor Newsom acknowledged California Indian genocide and encouraged all Californians to learn Native American history. “That’s the shameful past here in the state of California,” Newsom said to a large crowd of tribal representatives. “That past is not necessarily a big part of what is recognized today. It’s not in our textbooks.”

“It is important that we honor those ancestors whose land we stand on, those who came before. We need to start telling the truth in schools and stop proliferating false narratives within curriculum regarding the gold rush and the mission system” said Lupita Torres, a mother of two and concerned community member. “What happened to the California Indians here was particularly traumatic and needs to be acknowledged, if we want the healing to begin across all our intertribal nations.”

The Native Family Network is a group of parents with Native youth attending the Davis Joint Unified District, pushing for historical accuracy regarding the curriculum in schools.