Sudwerk earns gold in most competitive beer contest in U.S. 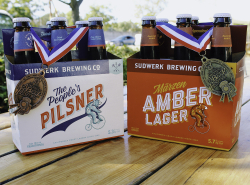 (From press release) Sudwerk Brewing Co. of Davis won two medals at the 2019 Great American Beer Festival, more than any other brewery in the Sacramento region.

Put on by the Brewers Association, the 33rd GABF, which concluded Saturday, Oct. 5 in Denver, is the most competitive and coveted beer festival in the nation. The competition included 9,497 entries from 2,295 breweries representing all 50 states plus Washington, D.C., Puerto Rico, and the Virgin Islands.

Sudwerk was the only brewery in the Sacramento region to take home a gold medal, for its Märzen Amber Lager. It won the American-Style Amber Lager category, which included 101 entries. This was the second year in a row the beer has medaled; it earned a silver in 2018.

Sudwerk also won bronze for The People’s Pilsner, in the Bohemian-Style Pilsener category, out of 123 entries. Brewery co-owner Trent Yackzan said he’s proud of the talented team at Sudwerk. “We’re honored to represent our hometown of Davis, UC Davis and the Sacramento region, and bring home the hardware that solidifies Sudwerk as one of the premier breweries on the planet.”

Sudwerk is one of three breweries in Northern California to win multiple medals (along with Alvarado Street Brewery and Morgan Territory Brewing). Only two other Sacramento area breweries medaled this year (Moonraker Brewing Co. and Big Sexy Brewing Co.).

“This year’s GABF competition was the largest and most competitive to date,” said Chris Swersey, competition manager at the Great American Beer Festival. “The beers and talent were as impressive as ever, and we congratulate this year’s winners for their achievements in brewing.”

Just four Northern California breweries received a gold medal, and 20 statewide. Of the more than 900 breweries in California, fewer than 8 percent earned any medal at the competition.

Nationwide, there were 283 medal-winning breweries and 318 medals awarded. Of those, 68 were from California, the most of any state. Gold, silver, and bronze medals were awarded in 107 beer categories covering 174 beer styles, establishing the best examples of each style in the country. For a complete list of winners, visit https://www.greatamericanbeerfestival.com/the-competition/winners/.

Sudwerk specializes in West Coast craft lagers, so “it’s especially gratifying to bring home medals in lager categories,” Yackzan said. “The Märzen set the standard for American Amber-style beers in the ’90s, so it’s impressive to see it continue to set the bar so high, 30 years after Sudwerk started.”

And pilsner, the fundamental American style beer, is “a true brewer’s beer,” Yackzan said. The clean, crisp taste is what brewers prefer at the end of the day. “To be recognized in that category is outstanding.”

Established in 1989, Sudwerk Brewing Co. is open from 4 to 8 p.m. Tuesdays through Thursdays, 4 to 9 p.m. Fridays, 2 to 9 p.m. on Saturdays, and 2 to 6 p.m. on Sundays at 2001 Second St., Davis. It offers a rotating menu of experimental and innovative beers, “honest pints” and growler fills, and good conversation. Learn more at http://sudwerkbrew.com.