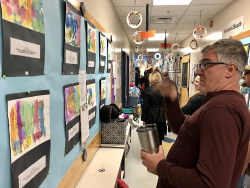 Dylan Wright of Third Space waves his hand in reaction to a student’s artwork based on a prompt to 3- to 5-year-olds: “What does your world look like?” Wright was among the Arts Alliance Davis participants who toured Peregrine School on Nov. 21. (Wendy Weitzel/Courtesy photo)

Davis artists and arts allies met Nov. 21 to collaborate about their holiday events and programs, and learn about an unlikely arts event space in town.

Arts Alliance Davis meets every other month, at rotating venues. It unites artists, civic and arts organizations, businesses, patrons and other community arts supporters. The meetings are open to anyone.

This gathering of nearly 30 members of the local creative community was at Peregrine School, 2650 Lillard Drive. School Director Lorie Hammond led a tour, offering information about its potential as a performance and meeting space. The 1-acre campus near Cowell Drive in South Davis has an outdoor stage, garden and grassy area.

Peregrine offers classes to 18-month-old preschoolers to sixth graders. Arts is one of the school’s core areas, and they try to expose kids to all kinds of arts in the community, Hammond said. Peregrine seeks out community members with expertise in visual, performing, musical and other arts to lead after-school and summer school classes. Autumn Labbé-Renault, chair of Arts Alliance Davis and executive director of Davis Media Access, said DMA plans to offer an after-school video arts class at Peregrine.

Student watercolor paintings lined the halls of the school. The illustrations evolved from the prompt, “What does your world look like?” Hammond said students “need ways to express their ideas other than speaking or writing.”

Most Arts Alliance Davis meetings include roundtable introductions and announcements. The arrival of the holiday season prompted Rachel Hartsough, the city of Davis’ arts and culture manager, to remind everyone that giving art, concert or play tickets, gift certificates, and arts memberships are a great way to support the local artistic community.

Debra Ariola said the Davis Craft & Vintage Fair is twice a month this time of year, under the covered pavilion in Central Park. Year-round, it’s from 11 a.m. to 4 p.m. on the first Sunday of the month, and at E Street Plaza for the Second Friday Art About. September through December, the fair is also on the third Sunday. Formerly called Square Tomatoes, Davis Craft & Vintage Fair provides an opportunity to purchase directly from local artisans. Each fair includes live music. The next events are Dec. 1 and 15.

Other upcoming events or celebrations mentioned at the meeting include:

Jord Nelsen and Dylan Wright of Third Space spoke about how they are working to bring it back after a several-year hiatus. Third Space offered an accessible site for emerging artists, mostly 18-26, to pursue what Wright called their “edgy art.” Third Space seeks volunteers to help organize, apply for grants and work on its website.

The next meeting of Arts Alliance Davis is 10 to 11:30 a.m. on Jan. 16. Then it plans an evening social on Feb. 20. The venues are to be determined. For more information, to post an event or opportunity, or to subscribe to the mailing list, contact Labbé-Renault at autumn@davismedia.org.

Follow and share local and regional arts updates on the city of Davis Arts and Cultural Affairs social media: