The Flag on My Porch 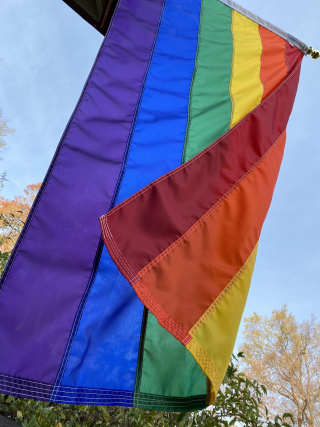 So my dear neighbors I want to tell you about the flag I just hung on my porch. You probably recognize it. It has been increasingly popular in recent years as more people display it. It has come to be a symbol of pride for many, but others find it surprisingly controversial. I want to tell you why I put it out.

It all started over the last few years. Increasingly there are kids at my house who view gender very differently than my friends and I did growing up. There is really a whole range of ideas that have been represented among the young people that come and go from my house and that is just what I know about.

Sadly, as I have talked with these young people, I have learned that many of their parents are unaccepting of their self-perception. For example, I know one young man coming of age who identifies male, but their father insists on calling them by their very feminine birth name. There are others who, I have learned, struggle with their parents over whether or not it is OK to love or desire the gender they have realized they do. It makes me sad to think of the pain not being accepted by their parents causes them, so I started thinking I might fly a flag in front of my house, so they know they are welcome here.

Then about a month ago a friend posted on Facebook about the harassment they faced on the street that day. It occurred in a very hip neighborhood of a very liberal city, but vicious things were yelled at them. It scared them enough that they were afraid to go straight home for fear of giving away key information to a potential attacker. That was the day I placed the order for the flag.

But I didn’t hang it up.

I wondered if I really wanted to hang up such a strong expression, and maybe even open myself and my family up for similar harassment.

Then, a few weeks later I learned that a young adult that has been to my house many times was assaulted because others thought he was gay. Never mind that he identifies as straight, he was attacked and hurt because he was perceived as being gay. That was the day I decided I really would hang up the flag.

I think showing this support for them is a good thing.

I love this. Thank you for writing the piece, thank you for walking your talk and hanging up the flag. Thank you for opening your home and making it a place of refuge. As a young young woman, I struggled with many things and will never forget the adults who let me just "be" without having to explain or justify or even "know". Sometimes I wonder what our legacies should be. However much you and I may disagree on various issues, Colin, I respect and appreciate you so much for your thoughts/actions here. You're leaving a legacy of love for these young people. Thank you.

Hello Colin, I am so glad to know you’ve hung up the flag!

The relatively rapid change in acceptance and support regarding sexual orientation and gender identification has been astonishing. That's probably a large part of the reason that (some) parents are not as accepting as their own children are, as noted in the article.

So while this is certainly encouraging, widespread acceptance and support has not yet occurred - even within Davis.

In any case, kudos to Colin for his leadership on this issue.