Rising homelessness in Davis: what comes next? 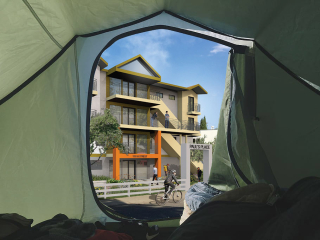 It’s hard to talk about homelessness. Many of us in Davis consider ourselves to be compassionate progressives sincerely wishing to support our community’s unhoused, but we’ve clearly failed to find answers. Tensions are rising, with local businesses reporting aggressive interactions downtown and Police Chief Pytel stating at the last City Council meeting that “one of the greatest tragedies we have in the city right now” is the degree to which homeless people victimize each other, with serious violence and theft occurring continuously. The most recent debate concerns the proposed location of a homeless day respite center near L & 5th streets. Some residents have cited safety concerns, while others, including Chief Pytel, feel that the center is a necessary first step to meaningful change.

Davis and Yolo County are beginning to grapple with what California has been going through over the last decade. Nearly a quarter of the nation’s homeless population—around 130,000 people—lives in our state. In the past decade, a combination of factors, including rising housing costs, the opioid epidemic, and cutbacks in mental health services, has driven a surge in the numbers of unhoused people in California. A survey conducted last January counted 655 homeless people in Yolo County, a nearly 43% increase in just two years. Almost two hundred homeless people live in Davis.

It’s not easy to talk about homelessness, but we can’t avoid it any longer. The most productive way to start a conversation is to consider what’s working in other cities. This Monday, December 16 at 6pm, the City of Davis Social Services Commission will host a talk and discussion on homelessness in the Community Chambers at 23 Russell Blvd. The talk will feature Rohit Naimpally, a senior research and policy manager at the world-renowned Poverty Action Lab (J-PAL). J-PAL’s co-founders Esther Duflo and Abhijit Banerjee won the Nobel Prize in Economics this year for their innovative approach to evidence-based policy reform. J-PAL focuses on conducting randomized controlled trials, similar to clinical trials in medicine, to evaluate the impact of policies.

Homelessness is one of the focus areas of J-PAL’s North America branch. Rohit will talk about policies in cities across the United States that have shown a strong impact on homelessness. He’ll discuss the effect of ideas to prevent homelessness: emergency financial assistance, critical time interventions for individuals with mental illness, legal help in eviction court, and others. He’ll also talk about reducing existing homelessness, including through transitional housing, permanent supportive housing, and rapid re-housing. Of particular importance to Davis and Yolo County, he’ll cover some possible market-level interventions, including tax credits, zoning ordinances, and rent control. He’ll also discuss opportunities for Davis and Yolo County to implement cutting-edge research on homelessness policies. The talk will be followed by a half-hour discussion for community members to share their comments and questions.

So come join us! It’s time to get the conversation going.

Curious if there are a significant numbers of empty homes in Davis.

Certainly it should be illegal for any project to get approved that has anything but ADA or 10 min parking at surface or any parking in the footprint of potential housing or income-generating businesses.