20 most-viewed Davisite articles from 2019
Wiener’s housing deregulation bill is back! 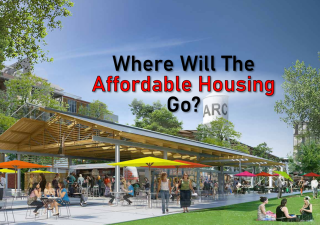 This is a letter sent to the City of Davis on January 6, 2020 regarding the the developers disclosure at the Social Services Commission that affordable housing will likely be built at another location separate from the ARC project. This disclosure could mean the project could actually build 1,000 to 1,308 new housing units, not the 850 units in the ARC project description. The difficulty is where the several hundred affordable housing units will be built is yet to be disclosed, and their likely off-site construction has not been accounted for in the Environmental Impact Report.

It was clear in the meeting the developer intends to locate affordable housing in a location other than the proposed ARC site. This additional offsite development was not considered in the MRIC EIR and must now be considered in the SEIR. As of the Social Services Commission meeting it has become clear that ARC is only part of the new construction the developer will bring to Davis, and the additional induced growth needs to be considered.

The current ARC proposal includes 850 housing units at the ARC site east of Mace Boulevard. The current interim affordable housing ordinance would require 15% affordable housing. Under the current ordinance this could result in 150 units built off site at a yet to be identified location in Davis. These 150 new units would be in addition to the 850 units on site for a total of 1,000 housing units built in Davis. These 150 new units are in addition to anything that was included in the MRIC EIR Mixed-use alternative and therefore must be considered in the SEIR.

One difficulty is that the current affordable housing ordinance is only an interim ordinance, and the actual required housing could be much more. The Social Services voted to recommend applying whatever ordinance is in place when more specific project proposals come forward. The previous ordinance would have required 35% affordable housing. The previous ordinance would have required an additional 458 housing units if they are built offsite. 850 units at ARC plus the offsite 458 units would result in 1308 total units being built as part of the ARC project. Since the Social Services Commission has expressed a desire to increase the amount of affordable housing required in new developments in Davis, it is reasonable to believe that as many as 458 more units will be built by the developer offsite. Analysis of these potential additional 458 offsite units must be done since they are tied to the ARC project and were not considered in the MRIC EIR or the MRIC EIR Mixed-use Alternative.

For comparison purposes, the Cannery is 547 units and Sterling apartments is 198 units. 150-458 new units is a very sizable new development to add to Davis and all the impacts must be analyzed in the EIR.

This becomes more complicated by the fact that the Social Services Commission went on to pass a recommendation that included, “The commission strongly recommends onsite affordable housing.” The difficulty is that this is incompatible with the MRIC Mixed-use EIR report that assumes there will be, “1.62 employees per household,” in other words, that “approximately 1,215 to 1,377 of the innovation center employees are anticipated to live and work on the Mixed-Use Site.” (Table 8-18)

Thank you, Colin. It is unbelievable that yet another new "feature" of this proposal emerges AFTER the City Council failed to ask any questions about the project while castigating citizens for asking questions.

And it emerges after the scoping period for the EIR. How can the environmental impact of this project be determined if we don't even know where the affordable housing will be located or how big it is?

Moving forward on the environmental review of this project was clearly premature.

This looks like yet another attempt by the developer to sneak in important elements of the project, following on previous inconsistencies in the project description.

Thanks for formally raising this issue Colin. This issue of how many and where the affordable units would go was not fully resolved at the Social Services meeting.

Furthermore, any validity to the MRIC Draft EIR is dependent upon implementation of the requirement of 60% of the MRIC housing units to be occupied by at least one MRIC employee in order for the for the MRIC Draft to use the assumptions which lowered the impacts such as traffic and circulation.

Hello Colin,
Thank you for this good analysis and emphasis on the problems with and inadequacy of the SEIR because this new information on the affordable housing, only disclosed at the very last minute. The entire MIRC /ARC planning process has been problematic from the outset and this is just another example.

Over the past two years or more, I have asked members of the Finance and Budget Commission to set policy that would require a review of past development to document whether a project, such as The Cannery, "penciled out" as finally negotiated and agreed to by the city and developers. If not, why not and what can be learned about the process and how to fix the process. What did the city loose in terms of income, meeting housing and economic and other needs, and have there been infrastructure and construction problems that could or should have been avoided.

With out this kind of analysis and review of past projects, I fear the city's planning department, commissions and the council will be unable to oversee the huge ARC project. What Colin describes above is just the kind of tactic meant to keep the city and the public off-guard, responding at the last minute and jeopardizes that the planning process will be open, transparent and democratic and does not build trust between the developer and the public.

Thanks for this heads-up, Colin.

I'm almost amused by this, as the developer seems to be continuing to make things more difficult for the proposal to be approved.

One might wonder why the Vanguard has not publicly acknowledged ARC's proposal, so far. It seems to me that the Vanguard's article today may be attempting to "lay the groundwork" to support ARC's off-site proposal. (Link provided, below.)

The reason that the Vanguard continuously suggests that peripheral developments are needed (to obtain Affordable housing) is not explained. We have an example of an infill site that recently received external funding (in the form of Sterling's Affordable housing development).

At this point, the Creekside Affordable housing development might also be viewed as "infill", as the site itself remained undeveloped for decades - as Mace Ranch was built-out. (And, this occurred during the time that RDA funding was available.

In addition, the University Mall site seems to be of sufficient size to accommodate an Affordable housing development. (If I'm not mistaken, it's about the same size as the Sterling site.) I previously pointed this out to David (on the Vanguard), but he did not respond to the point.

Perhaps this would also be a good time to re-examine what occurred regarding the Affordable housing plan at Nishi, and at Lincoln 40.

Strangely enough, the Vanguard also seems to be arguing that more external funding is needed for peripheral developments, while simultaneously acknowledging the funding recently received for infill developments.

I'm also not sure why David is bringing up the renewed attempt regarding SB-50, in regard to local Affordable housing developments.

As bad as SB-50 is, one of the goals is apparently to avoid increasing vehicle miles traveled. Which (again) calls into question the Vanguard's references to SB-50 (in regard to freeway-oriented peripheral developments).

Oakland recently approved a parcel tax on vacant properties (which apparently number in the thousands), in an effort to make them available (and to raise funds to address homelessness). Perhaps these are the types of efforts that will help.