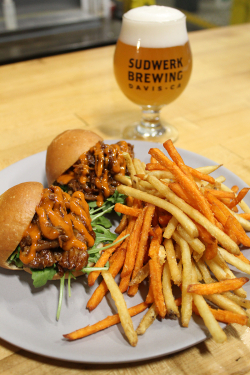 (From press release) The kitchen is back open at Sudwerk Brewing Co., and there’s a party to celebrate.

The community appreciation event is from 4 to 9 p.m. Jan. 17 at the brewery, at 2001 Second St. in Davis. Complimentary food samples will be available from 4 to 5:30 p.m. in the brewery’s taproom, The Dock. It marks the first step in the remodeling of the property, which includes an indoor beer hall.

Sudwerk hired chef Irie Gengler as director of restaurant operations, who’s been working on the menu and kitchen upgrade for months. Gengler has 30 years of high-level restaurant experience, including Wolfgang Puck’s Spago Chicago, Brix Napa Valley and several years with The Firehouse Restaurant in Old Sacramento. He helped open The Brewhouse in Whistler, B.C., and the recently completed Out of Bounds Craft Kitchen and Biergarten in Folsom.

For Sudwerk’s opening menu, Gengler chose foods that complement beer drinking, are easy to eat with your fingers, and are loaded with flavor. Most items can be prepared gluten-reduced, vegetarian or vegan. And now that there’s food, the brewery is permitted to serve wine. Current offerings include six from Yolo County and two from Napa.

Patrons order at the taproom bar. Food comes out fast, fresh to order. The menu features 10 shareable dishes, plus a Chocolate Almond Toffee dessert. And – in typical Sudwerk fashion ­– selections highlight community partnerships. Many of the ingredients – veggies, meats, cheeses, oils, nuts – are produced locally or in Northern or Central California. 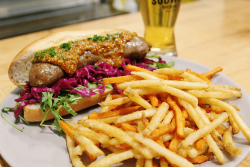 For example, the Märzen Bratwurst is made at UC Davis, using Sudwerk’s award-winning amber lager and a Village Bakery brioche bun. The Davis bakery supplies all of the breads on the menu. Vierra Farms of West Sacramento provides the gourds for the Kabocha Squash soup, and Nichols Farms provides nuts for various dishes. 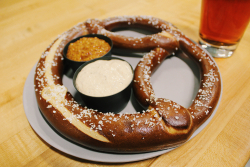 The Beer Garden Pretzel at Sudwerk Brewing Co. is a giant Bavarian-style pretzel, fresh out of the oven, with a People’s Pilsner beer cheese, and whole grain mustard/peppadew dip made with Märzen Amber Lager. Photo credit Kristina Drake/Sudwerk Brewing Co.

Beer makes its way into other food too. For the giant Beer Garden Pretzel, People’s Pilsner flavors the beer cheese, and Märzen adds flavor to the mustard. 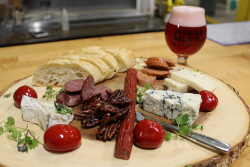 Other items include pulled pork sliders, chicken chorizo sausage, a cheese and charcuterie plate, fried Shishito peppers, red pepper hummus with papadum chips, and mixed nuts. There are three “Kidwerk” items: a “Hop Dog,” chicken strips, and mini carrots and edamame. The menu will evolve with the seasons, Gengler said, and grow when the kitchen expands. For example, he has plans to make his own pasta using the brewery’s spent grains.

Dean Unger and Ron Broward founded Davis’ first brewery in 1989. They sold the restaurant business to a San Francisco restaurateur in 2006, who operated it independently. The brewery gained momentum in 2013 after Yackzan (Unger’s grandson) and Fry coordinated a buyout. After the restaurant closed in 2016, Sudwerk brought in food trucks a couple of times a week. In 2019, it reacquired the restaurant space, and began upgrades.

Sudwerk remodeled the former restaurant banquet room into a beer hall and lounge, with a screen to project big games, including the NFL Playoffs. There’s a comfortable lounge seating area, new paint, and fresh murals and artwork by Davis artist Gregory Shilling. This greatly expands the brewery’s seating capacity, which was mostly outdoors, and opens the hall for meeting and event rentals.

“This is just a hinting of the greater project,” Fry said of the small-scale kitchen opening. The owners say they’re taking baby steps to gather feedback and raise more capital for other improvements of the patio, restaurant space and a larger kitchen.

Fry said feedback is positive since the kitchen’s soft opening on Dec. 20. Patrons are happy to have food and drink in one destination. Sudwerk owners are excited to offer quality food anytime it’s open, instead of relying on occasional food trucks. It will still add food trucks for special events like the Cherry Blossom Festival.

“It fills a void that Davis needs,” Fry said. “It’s a home-grown place for the community to gather over good beer and good food.” Families are welcome, and dogs are permitted outside.

Sounds great but they need more vegetarian options for dinner and particularly for "finger food". Also, I read somewhere that they would be offering wine for folks who are not into beer (like me), so I hope they add wine back into their new options to offer to order.

That said, I am so glad that they are reopening the restaurant so that there is another option of a place to have dinner and also a place to meet just for a beverage and munchies after work.

I would definitely go if you had more vegan options. Not just vegetarian for those of us who also don’t eat dairy.