she told me she wasn't going to vote in the upcoming election....
Voting information and deadlines

The City of Davis Planning Commission will conduct a workshop to hear a presentation on the Aggie Research Campus project and to take comments from the general public on Wednesday, February 26, 2020, starting at 7:00 PM . This workshop will be held at the Davis City Hall Community Chambers, 23 Russell Blvd., Davis, CA 95616.

The workshop format will include a brief introductory presentation by staff, a detailed presentation of the proposed project by the applicant, an opportunity for the Planning Commission to comment and an opportunity for public comment.  Members of the public may provide written or oral comments at the meeting.  NO DECISIONS WILL BE MADE REGARDING THE PROPOSED PROJECT AT THIS MEETING.  THIS WORKSHOP IS INFORMATIONAL ONLY.

If you have any questions regarding this workshop, please contact Principal Planner, Sherri Metzker at smetzker@cityofdavis.org. Additional information on the project proposal is available through the Department of Community Development and Sustainability, Planning Division, 23 Russell Boulevard, Davis, California, 95616, and is posted at the following City web address: https://www.cityofdavis.org/city-hall/community-development-and-sustainability/development-projects/aggie-research-campus.

The project applicant is requesting the following entitlements for the proposed project:
Yolo County LAFCo Approvals: 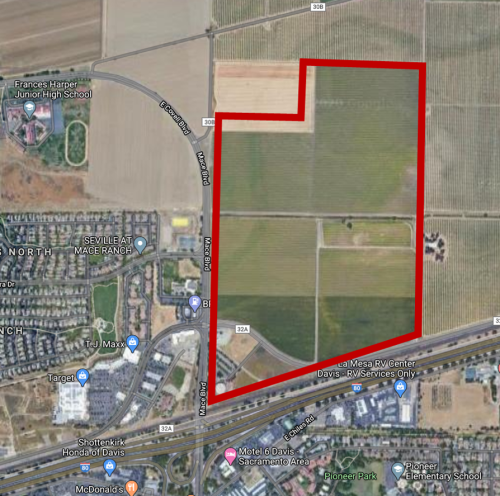 It seems that there's not much "advance notice" provided for this workshop.

Does anyone know why the 16-acre site (which includes Ikeda's) is associated with this proposal (regarding annexation)?

Ron, To my knowledge, like so many other aspects of this problem that has not been well explained.

I believe that the bits that are in the southwestern corner are not technically part of the project, but they are included for annexation only so that there isn't a non-Davis hole.

Makes one wonder what might happen with Ikeda's, if it's included within city limits.

There's been some discussion on Nextdoor relative to the applicability of the City's affordable housing ordinance to this project. Below is my recent Nextdoor post on this subject. First, however, anyone who wants to convey a written opinion to the Planning Commission on this subject, whether in support or opposition, is urged to not wait until the day of the Commission meeting to send an email. Not all Planning Commission members have time to look at emails that arrive the day of the meeting, and some cannot do so because they have full-time jobs. Please formulate your thoughts and email them well before the meeting. This advice is advised for all projects and issues that become before the Planning Commission.

A clarification of the City's affordable housing ordinance is needed. The ordinance applies very differently relative to the proposed ARC project versus the proposed University Commons project, because the ordinance was amended in the interval between the 2 project proposals.

In the past, the ordinance exempted vertical mixed-use developments and stacked condominiums from providing affordable housing. The ostensible rationale was to induce developers to build more downtown housing; i.e., housing above first floor commercial uses. For some reason, however, the mixed-use provision applied city-wide. This may very well have been an oversight in drafting the ordinance.

This is one of the aspects of the first Nishi project that drew public criticism. The "Nishi 1" proposal included commercial space on the first floor of each building, so therefore was not legally obligated to provide any affordable housing in compliance with the City ordinance.

The University Commons (Univ Mall) redevelopment project proposal was submitted to the City in Spring 2018 (April, I believe). This is when the vertical mixed use exemption was still in effect. An EIR scoping meeting for that project occurred in December 2018, and the draft EIR (DEIR) was issued for public comment a few months ago. The project is tentatively scheduled for the Planning Commission agenda in early April.

In the Fall of 2018 the Planning Commission recommended to the City Council that the vertical mixed-use exemption be deleted from the City's affordable housing ordinance. The City Council accepted this recommendation at its meeting of December 18, 2018, and the ordinance was formally amended on January 8, 2019 to remove the vertical mixed-use and stacked condo exemption. This action was taken pursuant to Ordinance No. 2545.

Because the ARC proposal was submitted to the City after the affordable housing ordinance was amended, the project is subject to the City's current affordable requirements. In other words, the ARC applicant cannot avoid providing affordable housing by placing commercial space on the first floor of multi-story housing structures.

In full disclosure, I am a member of the Davis Planning Commission, and was on the Commission in 2018 when the recommendation was made to delete the vertical mixed-use exemption from the affordable housing ordinance. This message is provided solely as informational background, and is not intended to convey a position in support nor in opposition to neither the proposed ARC project nor the proposed University Commons redevelopment project.

I don't understand the "workshop" format of the meeting. The description sounds like a normal PC meeting, but with no vote.

Todd, Greg can explain better than I can, but I think that's exactly what it is.

Ron, I don't think Ikeda's will be affected, except to have many more very nearby customers and whatever comes with being part of the City of Davis.