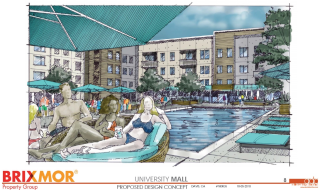 Some Davis residents have publicly questioned the planning commission’s May 27 unanimous rejection of the University Commons redevelopment proposal.  After carefully evaluating this project for 18 months, I suggest that decision reflects the community’s expectation that the commission will uphold good land use practices and support neighborhood integrity.

Instead of simply modernizing University Mall, the owner (Brixmor) wants to convert it to a large student housing complex with retail, offices and other features to purportedly serve community needs.  Brixmor’s March 2018 application included 174 housing units comprising 552 bedrooms within 208,606 square feet (sf). But 8 months later when the city issued an EIR “Notice of Preparation” (NOP), the apartments had increased by 90 units and almost doubled in area to 412,000 sf with 894 beds. There was no explanation for this increase.

The NOP said the 264 apartments would consist of 66 one-bedroom units, 104 two-bedrooms, 28 three-bedrooms, and 66 four-bedroom units (25%), focused on student bed rentals. But as I explained at the May hearing, a 2019 survey of Davis apartment complexes revealed that 76% of surveyed units have only 1 or 2 bedrooms. Units with 4 or more bedrooms comprise just 6% of surveyed apartments, compared to the 25% sought for University Commons. These factors clearly reveal Brixmor’s intent to exclusively cater to student renters because families are better served by conventional apartments.

Importantly, the planning commission’s July 2018 approval of the 440-bed Davis Live apartments included a proviso that the project’s “very high residential density” land use designation would be restricted to Russell Blvd between Highway 113 and Sycamore Lane. Brixmor’s proposal to house almost 900 students at the mall ignores the commission’s intent to restrain further high-density student housing.

University Commons would have only 264 residential parking spaces (equaling just 29% of the 894 beds).  Students could easily walk to campus, but most would bring vehicles to Davis for recreation, job commutes, etc. Those unable to obtain mall garage parking would probably move their cars to nearby businesses and residential streets, continually relocating them to avoid parking patrols.

UCD is meanwhile building campus housing that will only accommodate the 5,000 new admissions expected between 2018 and 2030, but refuses to correct past housing deficiencies.  As I explained during the May hearing, I estimate that UCD missed by 1,800 beds the 2012 housing goal set by the Regents in 2002.  UCD likewise fell 1,400 beds short of the 2016 housing target in its 2003 long range plan.  If those objectives had been met, Brixmor may have been less motivated to build what one commenter called a “dorm on steroids.”  As another wrote, why should Davis citizens bear the brunt of UCD’s insatiable quest for ever-larger enrollment coupled with its unwillingness to provide sufficient student housing?

Apprehension about the mall plan was evidenced by 16 letters to the city during EIR scoping in late 2018, including submissions by 2 planning commissioners. Concerns included building height and mass, increased congestion on Russell Blvd and nearby streets, bicycle and pedestrian safety, loss of community retail, inadequate parking, and an emphatic preference for affordable family rental housing.

The final EIR released in May 2020 included 36 opposition letters. Public alarm was vividly expressed, including the 2 commissioners (myself and former chair Steve Streeter) who repeated earlier reservations about the project’s assumptions and analysis. Instead of meaningful responses, the final EIR defended the project with boilerplate verbiage, but at least admitted University Commons would have significant and unavoidable impacts on transportation and circulation. Mitigation measures were described but as one commissioner observed, mitigation without funding and a clear implementation path is not mitigation.

Community concern about the project was consistently conveyed to the city and Brixmor over a span of 18 months, but the mall owner was unresponsive and did no community outreach. There likewise were no planning commission briefings or workshops that would have provided an early opportunity to evaluate Brixmor’s redevelopment concept. The result during the May 27 commission hearing was 20 speakers who reiterated the project’s myriad problems and urged commissioners to withhold support.

Commissioners listened to the public, thoroughly evaluated the project, and concluded it would not be advantageous for Davis. While cognizant of potential new tax revenue and challenges to traditional retail, the commission’s apprehensions had not diminished.  Even with one commissioner recused, the vote clearly rebuked Brixmor’s flawed redevelopment proposal.

Brixmor will probably appeal the commission’s decision to City Council. Hopefully Council will consider the commission’s concerns and deliberations. Brixmor may want to consider the alternative of updating the mall with no more than the 53,905 sf of housing allowed under the current zoning and Community Retail land use designation. A change in zoning and land use designation to allow almost 900 students to live at the shopping center should not be approved by City Council.

Greg Rowe is a member of the Davis Planning Commission. The opinions expressed in this article are entirely his own, however.

For anyone interested in submitting comments to City Council on this issue, the project is scheduled for the July 21 City Council meeting.

Although Greg did some good work here, it's unfortunate that he "bailed" on a far more impactful, peripheral proposal (DISC).