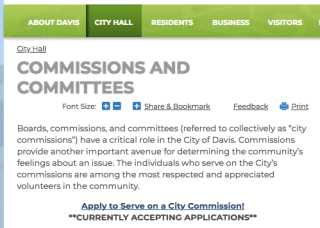 Informed and transparent decision-making is an essential pillar of good local governance. In Davis, this pillar is eroding. Recent years have seen multiple alarming instances of secretive action, shortsighted planning, and disconnect between community and leadership priorities.

We the undersigned—including current and former members of city commissions—call on City Council to address these issues. Specifically, we urge swift adoption of the attached common- sense proposals regarding (1) transparency, information disclosure and public engagement, (2) city commissions, and (3) advancement of significant actions and initiatives.

An unparalleled level of civic engagement and civic pride is one of Davis’s greatest strengths. Over 120 Davis citizens participate on city commissions (a term that also includes city boards, task forces, and committees), volunteering substantial time and effort to hear public comments, provide expert analysis, and propose informed actions on the issues that shape Davis’ present and future. In short, commissioners work tirelessly to ensure that the public voice is heard at all levels.

Because they serve as conduits between Davis government and Davis residents, commissioners are sometimes referred to as the “eyes and ears” of the City Council. Unfortunately, distance has grown between the City’s eyes and ears and its core executive bodies. Council and staff routinely make major decisions following only cursory consultation with relevant commissions. In the most egregious cases, such as with the BrightNight lease option agreement, relevant commissions are not consulted at all.

Other challenges further undermine the capacity of city commissions to participate actively in decision making.

First, Council makes very little information available about the nature of its closed sessions. While confidentiality of details may be justifiable in some cases, near-complete opacity surrounding the subjects and outcomes of closed sessions is not.

Second, conflicting guidance from City staff renders it functionally impossible for different commissions to collaborate on topics of mutual interest.

Third, the City provides almost nothing in the way of commissioner onboarding and training. This means that commissions are largely populated by individuals who have deep subject- matter expertise, but limited knowledge of how to contribute that expertise productively.

City Council can correct these problems by adopting the attached proposals. The result will be a Davis that is shaped by all its residents—a Davis that is not just a city, but a community.

The following signatories to this letter and the attached proposal are signing as individuals, not as official representatives of their city commissions or any other organization. Names are listed in alphabetical order, and people’s affiliations are noted for information only.

For further information about this proposal please contact any of the signatories who have provided email addresses.

Fantastic letter. I think the BrightNight Solar deal, and DISC moving forward to the November ballot with weak baseline features, are two clear examples where commission input was ignored to the detriment of the Davis community.

Great letter and long overdue. I really think this should be sent to the DE for publication as an opinion piece. I have only one major criticism. Many people do not follow Davis politics closely and for too many much of this will seem like an abstraction. Several more good examples of the CC ignoring commission advice; giving priority to city staff recs,, being deliberately opaque on some issues, and rushing to judgment would make this an even, or far, stronger piece.

Thanks, Dan. For what it's worth, the DE does have a piece out today talking about the letter, with a link to the actual letter at the bottom:

I do see your point about needing more examples. But I guess different statements do different things. This was meant to be a more general statement. The particular statements have appeared elsewhere. For example, the Davisite has published a number of op eds on procedural problems with BrightNite, e.g.:

(I can give other links if people want).

One thing that I don't think we wrote about was how the commissions were ignored in the final decision to put DISC on the ballot. Many commissions didn't even have their word-for-word recommendations put into the staff report, instead having a staff-distilled and incomplete version (and this happens all too often). Then staff dismissed many commission recommendations without discussion. Some of us drew attention to this to the Council, but these were likewise ignored, with the Council paying lip service to paying attention to commissions while in fact ignoring them in practice. None of this was helped by how rushed this process was or by the literally thousands of pages of documents. (Some will say that we've been talking about DISC for years, but that is false, since the project has substantially changed over time, even just in the last couple of months).

Yes, Roberta, on DISC, Alan Pryor's article below was excellent.

Aren't there also quite a few examples of the CC ignoring the large majority vote of commissions on key issues over the last few years? Then there is U-Mall. Not sure of all the commission votes, but a 9-0 vote by the PC. I realize this issue is unresolved and mention of this might appear to be taking a side and distract from general point.

Another good point that is not easy to insert, but very important, is the fact that, according to one commissioner I am in touch with, at least a couple of high level staff people do not actually live in Davis or even Yolo Co.

Dan, agreed, the piece by Alan Pryor that you linked to was excellent and a perfect illustration of the sort of process problem that the City has.

Indeed, it will be interesting to see what the City Council does in light of its unanimous vote against the U-Mall. I would not be surprised if a few face-saving minor changes were made, followed by approval. I say this as someone who has not taken a side on the U-Mall and who doesn't have a strong opinion on it.

Here is another sort of example of bad process: