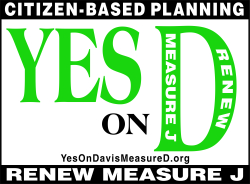 D is for “Democracy in action”

Measure D is on the November ballot to renew Measure J, which was originally passed by Davis voters in 2000 and renewed overwhelmingly in 2010 as Measure R. Measure J requires voter approval for development of open space or agricultural land within or adjacent to the city. Historically, the city’s borders have been where growth pressure is greatest. Measure J acknowledges the importance of incorporating citizen review into the planning process and is offered for renewal to the public every ten years.

Measure J was originally drafted by Davis citizens, with the help of environmental and legal counsel, as a response to the unbridled growth in the 1990’s. At the time, Davis was growing at more than double the rate of other California cities resulting in serious budgetary shortfalls, circulation issues, overwhelmed city services and inadequate school capacity for children.

Measure J requires project proposals undergo all normal entitlement review and public hearings before commissions and the City Council. Only if the Council approves a project does it go before the voters. Measure J requires that projects going before the voters include a list of “baseline features” that describe key elements that cannot be changed significantly without a subsequent vote.  Unlike “development agreements,” baseline project features are binding and cannot be renegotiated later. Measure J also wisely contains exemptions for schools, parks, and affordable housing necessary to meet regional fair share housing needs.

Fundamentally, Measure J was adopted so citizens would have a meaningful say in the ratification of projects proposed for open space and agricultural land where development pressures are greatest and most likely to distort the regular planning processes. Measure J was not intended to limit growth, but to give the City leverage to negotiate better projects with more amenities and fewer impacts on the environment. By renewing Measure J, Davis citizens will continue to have the final word. With Measure J, you get the project you voted for—and you get a better project.

Another major feature of Measure J is that it requires transparency. Projects must provide full disclosure of their descriptions and analysis for the public to review prior to a vote. This allows public participation in decisions related to impacts on traffic, sewer and water services, public safety, budgets and taxes.

Second, the decreased availability of housing is primarily due to UCD’s failure for the past two decades to build adequate housing for its rapid student population growth. UCD is the largest UC with over 5,300 acres and a 900-acre core campus, yet it has not been building the on-campus student housing needed for its own accelerated growth. UCD has been pushing 71% of its student housing needs onto Davis and other communities resulting in UCD’s housing needs absorbing a disproportional amount of the Davis housing market.

For instance, over the last two years the City has approved a significant amount of new housing.  This includes 4,500 new student-oriented beds, several affordable housing multi-family projects, and a senior-oriented development.  The City has also approved a workforce multi-family project and is soon to approve a mixed-use project including workforce rental housing. In addition, the City’s rental vacancy rate has increased due to the COVID-19 pandemic resulting in significantly far fewer UCD students returning to the City.

Voting Yes on Measure D to renew Measure J is truly democracy in action. Yes on Measure D will assure that Davis citizens retain their right to vote on projects that would develop open space and agricultural lands.

Finally, with the advent of City Council district elections there will be less pressure on each Council member to have a citywide overview. Rather than only three Council votes making the final decision, particularly if the project affects your neighborhood, Measure J assures that all Davis voters get to weigh in on the final decision. Continue your right to weigh in on the planning of our city’s future by voting YES on Measure D to renew Measure J Nov 3rd.