What the HEC is Going On? Part III
Care Not Cops Protest

What is fueling the push to radically rewrite Davis’s laws on development? 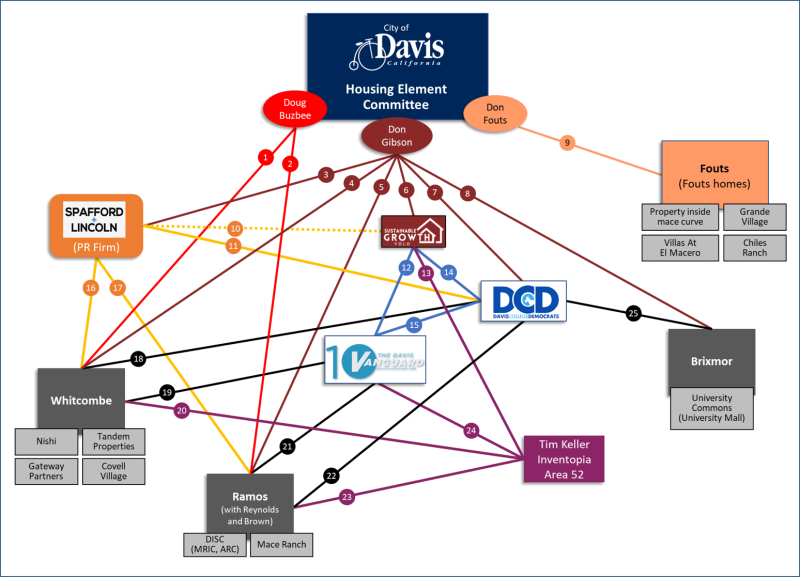 “Pro-development activists try to trick you into thinking it helps the poor to destroy neighborhoods to make way for luxury condos.”

“An agenda for building up the power base of the neoliberal right is not going to get too far in liberal beachheads like San Francisco or New York using the traditional Republican platform. It needs a new story that appeals to young millennials, and it has found it in the “pro-housing” language of the YIMBYs. But in the end, it’s pushing the same underlying principles: the way to a more efficient future is to destroy belief in regulation, public investment, and democratic participation, whether the arena is charter schools or health care or housing affordability.”

Nathan J. Robinson made these statements in a recent Current Affairs article. Let’s look at what is behind the YIMBY push in Davis.

The Davis Housing Element Update Committee (HEC) had its final meeting on May 26th where they voted to pass 10 motions that, if ultimately adopted, would radically change the development landscape in Davis. The recommendations include abolishing the 1% annual growth cap, doing away with single-family (R-1) housing zoning, removing checks, balances and public input from the approval process, and several other radical developer-friendly proposals. Neither staff nor the public were informed ahead of time of this discussion by the Committee. These radical proposals have since taken up most of the discussion at 2 planning commission meetings, and at the Davis City Council meeting on 6/15. To understand where these recommendations came from, one needs to understand the committee members and the web of developer and real estate interests surrounding the Committee. This chart helps paint that picture.

Buzbee is the Owner of DBRE Consulting – commercial property management and real estate consulting. There is no website for the company and no information readily available online as to who his clients are. His offices are at the Tandem Property buildings where Whitcombe’s offices are too. Buzbee’s Form 700 (conflict of interest self-reporting required by the State of CA for many government positions)  filed with the City related to his service on the Finance and Budget Commission reveals that Buzbee has millions of dollars of investment in the Covell Village Property, the Nishi project, and in several Tandem apartment complexes throughout Davis, and on the UCD campus.

Gibson was a genetics PhD candidate at UCD, but has spent considerable time in the last few years as sometimes paid and sometimes unpaid political lobbyist and organizer. He worked for the Nishi campaign, for the ARC/DISC (Measure B) campaign, and the University Commons (University Mall) campaign. According to his personal website http://www.dongibson.org/resume Gibson held a position with Spafford and Lincoln PR Firm that represents developers. Councilmember Dan Carson nominated Gibson for the HEC, though Gibson’s application did not disclose his employment organizing developer campaigns. Gibson is chairman of the recently-formed Sustainable Growth Yolo group (Yolo Growth).

Yolo Growth seems to only have recently emerged (see this Davisite article that includes a discussion of Yolo Growth’s proposals), but the website has posted two 2020 advocacy pieces written by DCD members on behalf of the Brixmor University Commons project. There is no indication where the current funding is coming from for the current Yolo Growth Work, but their work is very similar to other Spafford and Lincoln projects, and the website is done in the same style. This group is very similar to other so-called “YIMBY” groups in CA, many of which act as fronts for developers and urge rapid construction growth.

Gibson was the only signer of Yolo Growth's letter to the HEC advocating for radical market deregulation favorable to developers. This letter was sent by Gibson to the rest of the HEC Committee and was not released to the public until after the HEC adopted all of GIbson/Yolo Growth proposals.

It's about time someone wrote an article like this. Love the "web" chart, as well. I'll be looking at this more than once.

Personally, I think that Buzbee's appointment to the Finance and Budget Commission (FBC) might be the most significant point to note (beyond his participation in the HEC).

How is it that he's allowed to analyze proposals (such as DISC) via his appointment on the FBC, when considering the interests he is connected with?

What kind of town is Davis, anyway?

We're relatively new to Davis (arrived before the lockdown)--both husband and I have a background in journalism. Thank you for doing investigative reporting such as this.

Newish to Davis, I have to ask: Why isn't Davis Enterprise (DE) covering this matter too? Does DE avoid investigative reporting?