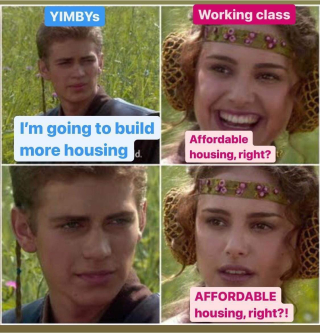 [1] YIMBY stands for “Yes In My Back Yard.” However, since YIMBYs often advocate for building in other areas outside of where they live, YIYBY (“Yes In Your Back Yard”) might be more accurate, albeit not as easy to say. “BANANAS” (Build ANything ANywhere AlwayS) is another suggested acronym. Self-identified YIMBYs have been making their presence known in Davis.

[2] NIMBY stands for “Not in My Back Yard.” No one actually calls themselves this; it’s an insult that YIYBYs (see previous footnote) like to sling against anyone who tries to argue for good projects and good planning.

I love this, including the "Jeff Foxworthy" style. But I'd add the following:

14. You advocate for freeway-oriented developments with thousands of parking spaces (and which creates additional demand for housing), while claiming to be concerned about climate change and housing shortages.

15. You work for a developer PR firm, such as Spafford and Lincoln.

16. You're a member of the UCD College Democrats, and/or Sustainable Growth Yolo.

This is a really good synopsis particularly for folks unfamiliar with the YIMBY term. Thanks much Rik, for sharing this very educational article.

Very good article, and I'd like to add to Ron's additions:

17. You can infer racism or actually resort to calling anyone a racist who disagrees with you.

18. If you're suing the state, to increase RHNA housing requirements:

https://www.sfweekly.com/news/yimbys-sue-for-even-more-housing-via-rhna/
(UCD's own "YIMBY" law professor is cited in the latter article above.)

So YIYBY would be a better term, Yes In Your Back Yard.