By Aaron Wedra, Marketing Coordinator for the Hattie Weber Museum

In 1864 it was determined that the California Pacific Rail Road would extend eastward from Sacramento over the Donner Summit route to become part of the transcontinental rail line.

The “Cal-P”, as it was familiarly known to early-day railroad builders, was incorporated in January 1865, and was principally financed with British capital. Construction began at Vallejo in December, 1866, and the first rails were laid at the same place on April 10, 1868.

Planners for the California Pacific Rail Road Company decided to build a line from South Vallejo to Sacramento which would also connect Marysville and Woodland at a junction in Davisville. Construction and grading of the rail bed began in Vallejo in December 1866 and the first rails were laid in April 1868.

The construction of the first Davis depot began in July 1868 and the first passenger and freight service between Vallejo and Davis Junction began on August 24th, 1868. The fare was $3.00.

In the 1850s, the area of Davisville was primarily used for agriculture and raising livestock. In November 1867 private promoters of the California Pacific Rail Road line purchased about 3,000 acres of the Jerome C. Davis and Isaac Davis farm along Putah Creek. They planned to establish a train station and junction on the slightly higher side of Putah Creek which remained dry during the rainy season. Calling themselves “The Proprietors of Davisville,” they laid out a speculative town with a grid of plots and streets next to the junction of the railroad line from Vallejo to Sacramento and from Davisville to Woodland and points north.

The California Pacific Railroad line put Davisville on the map in 1868. Once the original train depot was built and rail service began, businesses, homes and the first post office appeared near the railroad tracks and the town of Davisville was born.

The advantage of trade and the availability of convenient passenger service played a major role in the development of Davis – not the least of which was the selection of Davisville as the site for the University Farm in 1906.

In 1871 the Cal-P was taken over by the Central Pacific Railroad; a fire later burned down the 19th century-style station. In 1914 a mission revival station was built by Southern Pacific to replace the original Davisville depot. The station is currently listed in the National Register of Historic Places and is located at 2nd & H Streets.

The revival station saw its 75th anniversary in 1988. On June 4th of that year the City of Davis was acknowledged with the George Falcon Golden Spike Award by the Train Riders' Association of California for the renovation of the train station that had recently taken place in 1986.

In 1989 the City of Davis and Yolo County were again recognized for the depot's renovation by Caltrans.

Today Amtrak offers two types of train service from the Davis train station: the "Capitol Corridor" service with trains about every hour east to Sacramento and west to Oakland/San Jose, and the Long Distance service with one departure daily of the Coast Starlight (north to Portland and Seattle, south to Los Angeles), and the California Zephyr (east to Reno, Salt Lake City, Denver, Omaha and Chicago). Capitol Corridor trains are the ones commonly seen in Davis, with blue orange and silver cars, about 5 cars long. Long distance trains are silver with red and blue stripes, have 2 engines, and 7-11 cars. 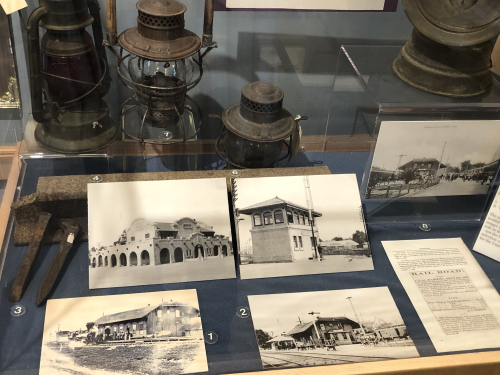 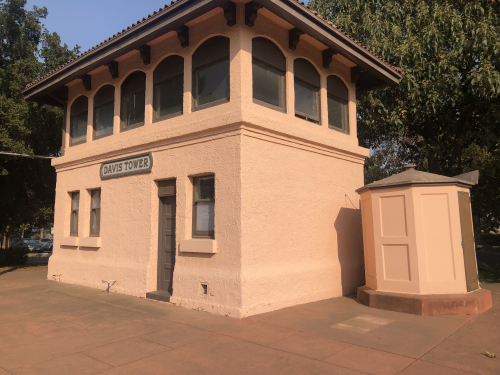 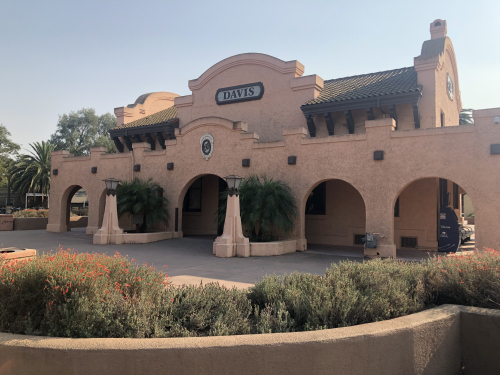 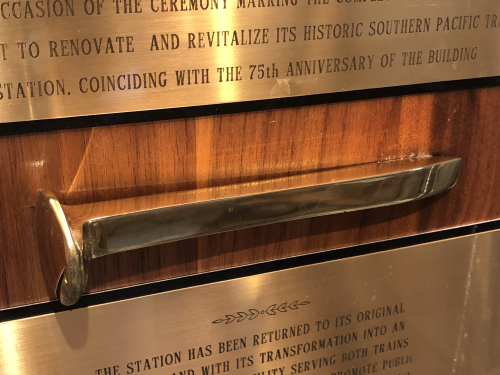 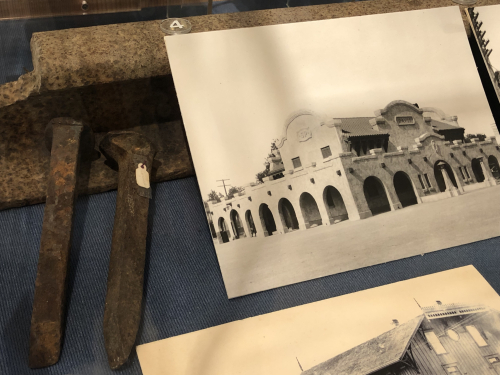 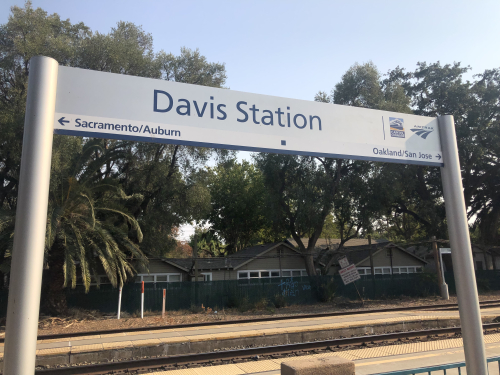 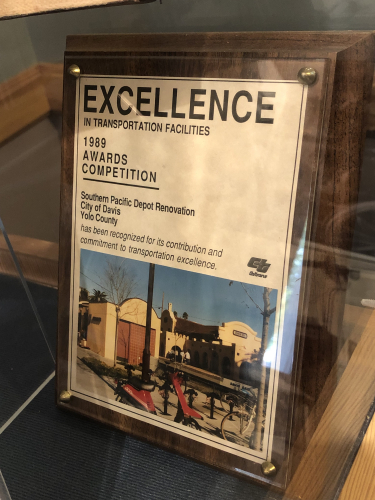 This article is pretty accurate. A few nagging details 'for the record':

• "In 1864 it was determined that the California Pacific Rail Road would extend eastward from Sacramento over the Donner Summit route to become part of the transcontinental rail line." -- Actually in 1861 the Central Pacific Railroad was founded to build east from Sacramento as the western section of the first transcontinental railroad. The California Pacific Railroad was built to connect ferry service from San Francisco to Vallejo with Central Pacific trains in Sacramento.

• "In 1914 a mission revival station was built by Southern Pacific to replace the original Davisville depot." -- I don't know if it's accurate, but the emblem on the station says "1913", as it did on the original mission-style depot before the rebuild. I think there may have been a third depot in between, but that I am unsure about.

• " . . . for the renovation of the train station that had recently taken place in 1986." -- 'renovation' may give the impression it was repaired and repainted; indeed, it was all but rebuilt from scratch, with only a portion of the skeletal wood frame the main part of the building left when the 1913 station was taken down.

• "Capitol Corridor" service with trains about every hour east to Sacramento and west to Oakland/San Jose." Hourly service is Caltrans' and Capitol Corridor's goal. That level of service has never quite been achieved, with 2-3 hours between trains at certain times pre-Covid-19, and even fewer trains since the lockdown. Eventually, as more infrastructure is put in place, trains will depart Davis at the same time after the hour in each direction except in the dead of night -- so every hour literally about 16 times a day. This is limited mostly by equipment availability, and at the present time by continuing depressed (though recovering) ridership levels due to the pandemic.

Anyway Davis Depot also has Amtrak Thruway (bus) services. These connect people here to other Amtrak rail services, e.g. the San Joaquin to Bakersfield (and many points in southern California.)

The station also has bike lockers that fit long tail bikes, but not larger cargo bikes and trailers.

There's a project to improve the station further, but it seems that this has been delayed due to Covid. Similarly there's a plan for a bike-ped over- or under crossing between the station and Olive Drive. Ryder has committed funding for this and the City is looking for more.

I would like to see some photos of the 1986 "renovation" that Alan M. referred to, but did not find any via a quick Internet search.

I love the insight and knowledge you've provided Alan. Next Saturday when I'm volunteering at the Hattie Weber I'm going to share the excitement over the Davis' Train Station with the museum staff, do research and make updates/ corrections. I'm a marketing and graphic design person trying to spread the word about the Hattie Weber because it's a treasure trove. I'm most delighted when community members and true historians or simply brilliant minds bother to point out conundrums and even mistakes 😊Thank you so much to Todd and Ron as well.

Thanks AW. This is my 'thing'. I appreciate your compilation/enthusiasm - much more accurate than many I've seen on rail history/present.

RO, I'm almost certain I took a few photos of the station frame at renovation, and I'd love to contribute to the museum collection, but alas my 'slide collection' is not well indexed and it could take hours or days to find them! I never saw any other photos of this elsewhere.

Alan—Good call on the 1913 vs 1914. It is right on the building, and I trust that as a primary source. There are some web pages online that say 1914, but they are incorrect. The National Registrar of Historic places didn't say definitively at a glance, but another sign at the train station implies 1913 is the correct year as well.

Just going through your comments. One thing I can verify is that our statement "the City of Davis was acknowledged with the George Falcon Golden Spike Award by the Train Riders' Association of California" is correct as it comes straight from the Golden Spike Award plaque on our wall here in the museum. Or is there more to the story??

I'd love to see a source so I can make that change to our article. Thank you so much for your interest and inspiration!