Councilmember Carson sued me for signing a ballot statement 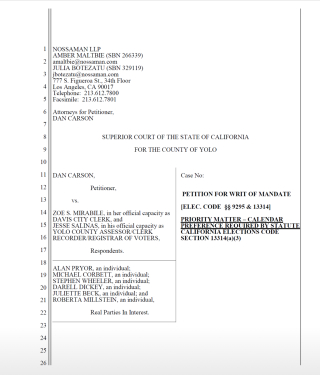 Two weeks ago, I was stunned to learn from a Davis Enterprise article that I and other signers of the Argument Against Measure H (Argument Against DiSC) were being sued by none other than Councilmember Dan Carson, who is serving as the “Honorary” Chair of the developer-funded Yes on DiSC campaign. Measure H is on the June 7 ballot; DiSC is a proposed development project on 100 acres of mostly prime farmland outside the City limits, adjacent to I-80 and Mace Blvd.

Apparently, the suit had been filed on the last possible day. I waited to be served papers, but none ever arrived. I did receive a phone call, later learning that Councilmember Carson had obtained my phone number from a Commission Chair. I was extremely surprised to learn that he would do something like that, especially since he apparently did not let on what he wanted my phone number for. It is still unclear whether Councilmember Carson funded this lawsuit himself or if someone else funded it; he has refused to answer several people who have asked him.

With a tight deadline for the ballot to be printed by the County, citizens opposed to DiSC suddenly found themselves having to find a lawyer within a matter of days (like, two days) and the prospect of spending tens of thousands of dollars to retain one — well in excess of the budget for the entire grassroots campaign.

And what was the suit about?  Well, perhaps Councilmember Carson thought that he could pull the wool over a judge's eyes, but the judge found no problems with our contention that DiSC is in violation of the City's General Plan or our contention that there would be unmitigated greenhouse gases from the project or that there were almost no commitments.

It is true that we, in the spirit of reconciliation, offered to change the type of units that were used to describe the amount of greenhouse gases, and the word “only” was deleted from one sentence. For that, Councilmember Carson and the Yes on DiSC developer is running around declaring victory. But that is the spin spin spin of someone who lost big time and is now trying to save face.

The truth is that this was a blatant attempt to curtail the engagement of Davis's citizens in the Democratic process. It was an attempt to squelch our free speech, by an elected official. Luckily, the judge saw through it.

This is a low point for Davis's politics. I fear that future ballot signers will think twice before signing. I also fear that any future campaigns could be quashed just by deep pocket developers filing lawsuits to bankrupt the opposition, no matter the merits of their case. And that would be a sad loss for participatory democracy.

Let’s not let them get away with this. Please vote “No” on Measure H.

UPDATE 4/6/2022: Last night at the Davis City Council meeting, Dan Ramos, the DiSC developer, admitted that the campaign -- which is almost entirely or perhaps even fully funded by Ramos's company, Ramco Enterprises -- funded the lawsuit against me and the other ballot signers for the "No" side.

I think this can be fairly translated as follows: the lawsuit which could only be brought by a citizen of Davis, was actually funded by the developer, and Councilmember Carson allowed for "his" lawsuit to be paid by that developer.

I leave it to the reader to determine for themselves whether it is ethical for a sitting Councilmember to have brought a developer-funded lawsuit against his own citizens, full of spurious charges. I maintain that this is completely unethical even if it turns out to be legal.

ADDITIONAL UPDATE 4/6/22: In his approximately 3 minute reply to public comment, wherein Dan Carson defended his lawsuit – not a topic on the agenda, it should be noted – Dan Carson also admitted that his lawsuit was funded by the Yes on H campaign.

Not clear to me if there were $10k's incurred or not. If there were, perhaps start a go-fund-me to reimburse. People could give $150 each, the amount they would have given to Carson's campaign. Before he pulled this epic blunder.

I can't say for certain the legal fees involved, but given that both sides were represented by high-powered L.A. law firms, "tens of thousands" is highly likely.

As for a gofundme, that would be a problem. Donations to a campaign to help with these costs are political contributions and per California FPPC rules need to be tracked properly.

Anyone who is interested in chipping in, even just a small amount, to help the No on Disc campaign with this huge financial blow should head on over to votenoondisc.com and click on the Donate button. That's the best way to contribute. (BTW, you're not limited to $150 as with the Davis City Council races.)

Why does our City Council and Mayor tolerate this blatant conflict of interest? The lawsuit filed by Dan Carson was clearly designed to bankrupt a grassroots funded campaign and stifle our right as citizens to hold an opposing view to an elected official. A sitting City Councilman should not be the "Honorary Chair" of a private development project and use that position in city government to further the aims of a developer who does not have the interests of voters in mind.

And the fact that he will not reveal who paid to file and present his lawsuit should concern ALL voters in Davis.

I agree with Gilbert Coville: donate to https://www.votenoondisc.com/ and help keep Davis a place where residents are allowed to oppose poor planning and development.

Marrone Bio was just sold for $236 million - Founder and Board Member Pamela Marrone was one of the signatories of the Argument in Favor of Measure H.

I have no evidence that Pamela Marrone paid for Carson's legal expenses.

I can confirm that the only winners here were the lawyers. The result of this futile exercise is to have one word removed and the units of pollution switched in the NO statement. This required expenditures in the many tens if thousands of dollars. Attorney fees on both sides, plus all the court time that the public pays for. And this doesn't account the insane amount of volunteer time to prepare for and attend the hearing.

If this lawsuit was considered a winning, fiscally-responsible action, I encourage you to think long and hard about our city leadership.

If you decide to contribute to the NO campaign, your money goes even further if a paper check is delivered to the campaign so that the online accounting fee doesn't take a bite out of the donation.

It bears repeating that Carson claimed being a "citizen" when he used the gravitas of elected office - and possibly the funding that such a position helps makes available - to launch this legal exercise.

I just donated $100 which is as much as I can offer with where I'm at currently. Even though I'm pro DiSC I believe you all should be able to pick your sword back up to continue the battle respectfully.

Suggest keeping a close eye on campaign expense filings by the Yes side. I'm no expert, but the chair of a campaign, "honorary" or otherwise, incurring legal expenses on behalf of the campaign to sue the opposition certainly seems like a reportable campaign expenditure. And let's hope the details of the expense can be identified before the election.

UPDATE: Last night at the Davis City Council meeting, Dan Ramos, the DiSC developer, admitted that the campaign -- which is almost entirely or perhaps even fully funded by Ramos's company, Ramco Enterprises -- funded the lawsuit against me and the other ballot signers for the "No" side.

I think this can be fairly translated as follows: the lawsuit which could only be brought by a citizen of Davis, was actually funded by the developer, and Councilmember Carson allowed for "his" lawsuit to be paid by that developer.

I leave it to the reader to determine for themselves whether it is ethical for a sitting Councilmember to have brought a developer-funded lawsuit against his own citizens, full of spurious chargers. I maintain that this is completely unethical even if it turns out to be legal.

Thank you for your donation to the No campaign, Aaron. Although of course I think you are on the wrong side, I respect you for supporting a healthy and open discussion of the issues.