City Planning Documents have No Teeth
Will the supposed $3.9 million net revenue gain to the City ever really come? 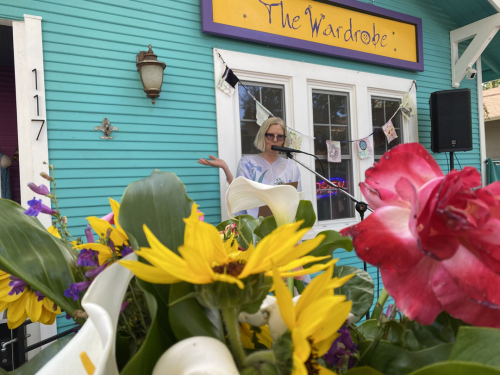 Earth Day at The Wardrobe

A large crowd gathered on D street as the lilting flutes of Paddy on the Binge and the melodic voice of Skyler Blakeslee floated over Downtown Davis. Earth Day in downtown Davis drew a respectable crowd of earth stewards, well-wishers and fashionistas.  A blend that makes absolute sense when you come to know the values and practices of The Wardrobe and its proprietor Heather Caswell.

“Slow Fashion” that ranges from elegant to beautiful and is sensibly sourced with much of the to die for clothing coming from local artisans and companies with sustainable practices.

Larson had spent the earlier part of the day at the Davis Climate strike at the corner of B and 5th as this was the 133rd week of striking. Larson was just the week before given a special environmental award by the City of Davis. Larson is becoming one of the most effective voices in the City on climate change and a real local hero.

“Always believe there is good in this world that is worth fighting for,” Larson implored the crowed. “Make phone calls and write letters to local and world leaders demanding change.”

With considerable crowd engagement and frequent interruptions of cheering, Larson went on to pledge, “I will continue striking every Friday and I will continue fighting for climate justice.  We must turn our fear, sadness, guilt and anger into action. We must take action now!” 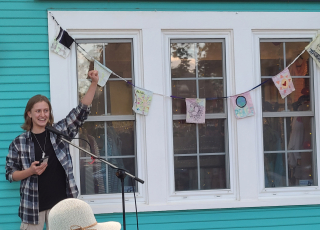 Gunther kicked of the speakers earlier with a passionate love poem to trees and a playful urgency recognizing fighting climate change inherently involves planting trees. If you already have a goal to help the environment, it certainly includes planting trees. Gunther stated, “If you’re not sure what you should do to help the environment, plant trees…. Trees are great!”

Gunther also extolled the virtues of Tree Davis where he serves as a board member noting, “We have planted around 800 trees” just this year. He encouraged everyone to join in the Tree Davis Tree Tribute program saying, “Planting a tree as a tribute to someone is a great way to remember someone while also contributing to the wellness of the planet.” 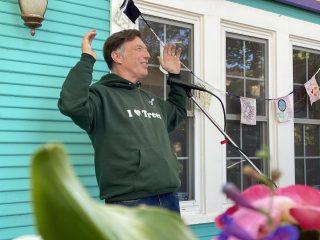 After Gunther, Nancy Price spoke from the small soap box on the porch of the wardrobe. Nancy  was involved in the first earth day in 1970. She noted, “20 million people from San Francisco to New York came out for the very first Earth Day” and went on to remind us that Sen. Gaylord Nelson, who proposed Earth Day, had been inspired by Martin Luther King who in 1967 had called on people to move away from our materialistic and capitalist society and put the focus on people and community.”

Price went on to implore those gathered, “Lets shout out Peace for the earth   No more war and bring together peace and climate activism.”

Price closed by urging everyone to take action locally by voting No on measure H on June 7. 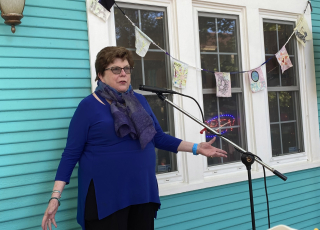 Former California Superintendent of Schools Delaine Eastin delivered a fiery speech. She lamented that, “Only 35% of people in America recycle regularly” and encouraged everyone to do better. She stated. “It is essential that we have public policy in California that targets promoting recycling.”

Eastin made clear her message was an uplifting one stating, “I hope our message for the future is optimism and hope.” 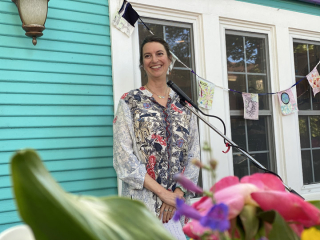 Juliette Beck is running for Yolo County Supervisor stepped up on the soap box and belted out an impassioned message fitting of presidential candidate. Beck opened with a land acknowledgement and then urged everyone to embrace the knowledge of the indigenous people of what is now California, “If our ancestors had respected Native Californians as the sophisticated stewards of the land that they were and continue to be, what would California look like today? It would be very different.”

Beck leaped into the next topic asserting, “We are in a climate crisis and our natural resources are depleting.” But she encouraged the crowd with visions of hope, “We have the power, we are reclaiming our power to protect and sustain the Earth.”

The rapt audience was fully engaged with Beck and the event began to take on the sense of a movement as Beck continued, “Youth have a voice in defending our future.”

As applause died back enough to speak again Beck delivered, “System change not climate change.” And, “For a system change we need an inclusive economy which is based on sustainability, ethics and social justice.”

Beck then returned focus to her task at hand and made clear that Yolo County needed a climate focused activist for the County Board of supervisors and that, “Climate change won’t heal until women are elected into office.” 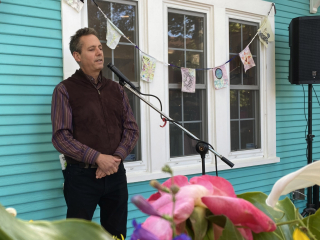 Jonathan Greenberg next took the stage. I had not seen Greenberg speak since he was organizing mass antiwar rallies in New York in the early two thousands. He appealed to the crowd, “We are not doing enough, the trajectory takes us off a cliff of climate disaster and extinction…. We need to organize differently if we are going to change the system.”

Next Greenberg took on the media’s role stating, “90% of all media is controlled by big corporations that are only interested in ratings and ads.”

This is no surprise as Greenberg is editor and owner of the award-winning Sonoma Independent website, which serves the public interest with insight, solutions, and advocacy.  And he is an investigative financial journalist with 40 years of experience with national publications, including Forbes, The Washington Post, The New York Times, New York, Town & Country. Mother Jones and The New Republic. During the past few years, Jonathan wrote four of the most widely read exposés about Donald Trump’s career published in the Washington Post.

Greenberg closed beseeching the crowd to be involved noting, “Transparency: raising awareness through petition for a specific solution. Showing data from the people in order to hold representatives accountable for representing their people.”

All in all it was an amazing afternoon with perfect weather, excellent Irish music, a stunning fashion show, and powerful speakers. But most importantly of all, there was a sense of community coming together. A community that spanned across several generations and looked to the future with purpose and intent. An intent to do the work to make sure the planet remains habitable for generations to come. 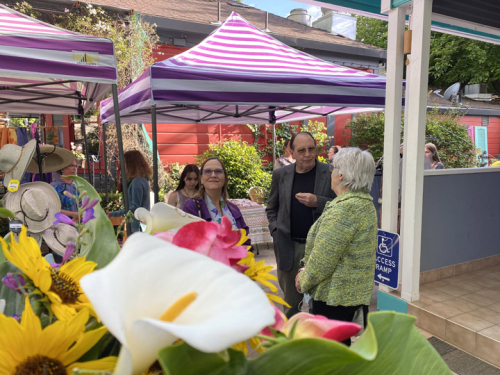