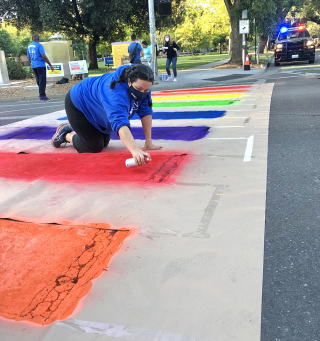 Dawn Coder was one of several Davis Pride volunteers who painted the crosswalks around Central Park on May 29. (Wendy Weitzel/Courtesy photo)

(From press release) It’s International LGBTQ+ month, and Davis is showing its pride with a festival, skate night, and run/walk June 11 and 12 in Davis’ Central Park.

Volunteers painted rainbow crosswalks around the Park, 301 C St., on May 29, in preparation for several pride activities, all produced by the Davis Phoenix Coalition. 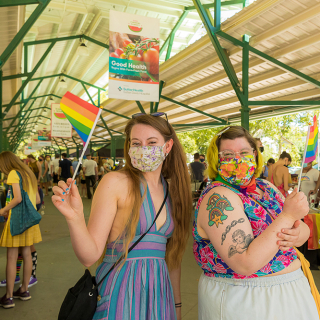 The city of Davis is a sponsor of the Davis Pride Festival – awarding it money from its Arts and Cultural Affairs Fund. Throughout the month, the city has rainbow banners hanging from light posts around town, and flies the rainbow flag at Davis City Hall.

The Davis Phoenix Coalition, is a nonprofit working to foster diversity, eliminate intolerance, prevent hate-motivated violence and support LGBTQ+ youths. It was founded in the aftermath of a 2013 anti-gay attack on Davis resident “Mikey” Partida. Proceeds from Davis Pride support the coalition’s anti-racism and anti-bullying campaigns, support to LGBTQ+ youths and their families, and outreach with area police departments, churches and schools.