Letter: Fortune is the only progressive-environmentalist running for Council in District 1
Davis Deserves Better than Carson

(From press release) Youth leaders from Yolo County led a colorful all-ages march today in central Davis to protest the city’s failure to address the climate emergency. The marchers made their way from the library to central park and the city hall, mirroring thousands of actions across the world on September 23 organized by the #FridaysforFuture movement.

The young marchers denounced the city council and administration for their failure to listen to the demands of young people and for not giving them a seat at the table in the planning and delivery of the city’s new Climate Action and Adaptation Plan.

“We young people are the most impacted by climate change and yet our demands for action and change have consistently fallen on deaf ears in the City of Davis,” said Eliot Larson, coordinator of Fridays for Future Davis. 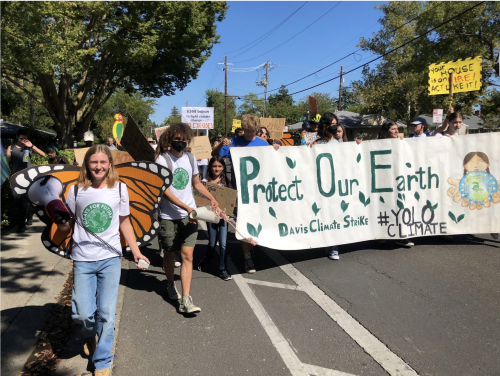 The march comes exactly three years after Davis’ biggest ever climate strike in September 2019 when almost 1000 young people walked out of school and marched downtown. At the time, the marchers presented a list of demands including all-electric new building construction, a moratorium on large single family homes, shoppers’ buses, energy retrofit incentives, and vegetarian-only food at schools and city events. Since then, there has been an almost weekly climate strike at the junction of 5th and B, directly across from Davis City Hall and the Davis Joint Unified School District..

“We have just faced a record heatwave with unbearable temperatures a couple of weeks ago. Yet our elected officials are still not treating this crisis as an emergency. They hold our future - whether we have a liveable planet or not - in their hands. The Earth’s clock is ticking. We cannot and will not wait until 2035 or 2030 for change to come. We have to act boldly now,” said sixteen-year old Larson.

Among the marchers is nine-year old Minsa Ali Muhammad, a student at Spring Lake Elementary in Woodland, whose family in Pakistan has seen their village, orchards, livestock, schools and places of worship devastated by unprecedented climate-induced flooding. Her ancestral homeland of Chitral is in the path of melting Himalayan glaciers. Recent glacial outbursts - flooding that sends rocks, mud and debris  downstream –have displaced hundreds of families that are now living in tents.

“We have to do everything we can to stop climate change. We have to do a better job of taking care of our Earth,” said Muhammad who called for emergency, solidarity action and is collecting funds for flood victims. 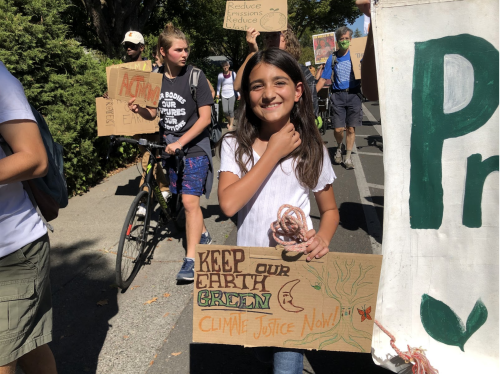 The marchers attempted to deliver a letter to Davis Mayor Lucas Frerichs with an updated list of priority climate actions, but he told organizers of today’s march he was unavailable.  After staging a “die-in” in Central Park symbolizing the loss of animal and plant species and harm to life-sustaining ecosystems,  young people shared their hopes, fears and frustration at the city’s lack of action.

Mattias Rowenbale, who attended the strike in 2019 and is now a senior at Davis High and the President of the school’s Environmental Club said, “I was in awe of this movement and the passion of the people of Davis. But today I am filled with anger. It’s hard to see a way forward. It’s hard to show the officials in Davis that they can have an impact.  But we must. We are just one community, but we CAN make a difference and set an example for the world.” 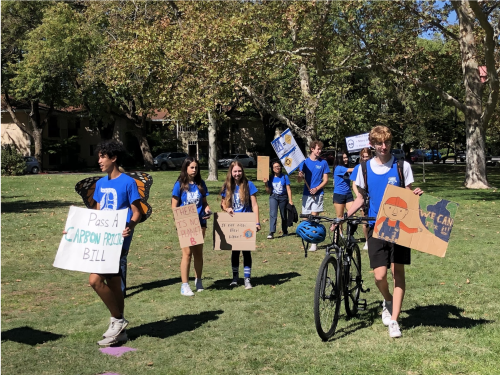 No surprise here. Everything falls on deaf ears when it comes to the current city council! Vote for Kelsey Fortune and Adam Morill in November! Make a change!

Declared emergency! Yet.... we'll keep subsidizing people who wish to drive and park in our downtown. Because hey, we need to balance the needs of emergencies and motorist convenience!

I pretty sure we also subsidize people who wish to ride their bikes and park downtown too.

Demands? How about requests? It's possible there are other factors such as effectiveness and cost to consider before giving in to demands.

and for not giving them a seat at the table in the planning and delivery of the city’s new Climate Action and Adaptation Plan.

The best way to get a seat at the table in America is to BUY the seat, not to wait for someone to give you a seat. See the success of the Climate Change Industrial Complex.

“We young people are the most impacted by climate change and yet our demands for action and change have consistently fallen on deaf ears in the City of Davis,” said Eliot Larson

Because Davis doing something will make a blip of a difference? How about focusing on China, or India, or Congo or in the least our national government.

Best idea is to purchase property at least 50' above sea level. In Canada.

We aren't going to turn around 250 years of industrialization, not when we continue to demand to be able to reach every corner of the world in hours, and drop off the kids at soccer in a minivan. AND all the 100,000,000's countries just coming of age will soon want the same - and windmills and solar panels and batteries aren't going to come fast enough nor are they made from fairy dust or disposed of in compost heaps.

Adapt or kiss our asses goodbye.

But stop hassling the city council. Be real. They can't even fix the mini-Grand-Canyon cracks in the pavement.

Without dramatic measures to curtail climate change, no adaptation will be possible and we will be kissing our asses goodbye.

"Without dramatic measures to curtail climate change, no adaptation will be possible and we will be kissing our asses goodbye."

We have to stop building houses on ocean cliffs and in tinder dry forests. Don't rebuild Paradise, ABANDON Paradise.

But no, we act like it's sane to live in places that are insane to live in. So I say to the concerned students: don't be dumbasses and live in stupid places. This ship is not going to be righted in your lifetimes. Too much damage done, too much still being done. All you have to do is look at the pandemic -- least travel and impact ever, and it didn't make a blip of difference, still 116-degree record in Sac. ADAPT, save yourselves, live in smart places.

And maybe the next pandemic will kill a lot more people, like 70-80% of world population, enough that there will be a dramatic shift in the human effect on the planet. Working on a much more-deadly virus will do a heck of a lot more than bugging the Davis City Council. So maybe major in virology and have a secret side project :-|

Alan, I think our (dark) thoughts are more or less in the same vein and of course people should do what they can to save themselves -- if they are in a position to. But shit is going to get very bad in the lifetime of today's youth, and more and more I think in your and my lifetimes too, regardless of where we live. I mean, it's already getting pretty sucky in a variety of ways. So I support any attempt, no matter how much of a Hail Mary (as I said on another recent post) to try to make a difference. We do what we can locally and hope that others do the same, just as we cast our votes and hope that others vote too. And we hope that we can inspire others to act if we act. Go down fighting and all of that.

Welll - how about we all try to garden more and figure out how to get along. We have a garden even still - to till manage and diversify. The hard work is how to empower people such that we retain leverage in the power structure and at the same time give up the plane trips, the second homes, the combustion engines. We keep eduction, healthcare, food production and shelter and get used to living most of our lives locally - local production, consumption and care.
- - The youth are demanding sanity because asking is not working.