Unfortunately, movie reviews are not my forté. (The Davisite looks forward to the time when our movie reviewer, G. Bruno Fischer, can resume writing his reviews again).  But three recent movies, all focused on women, have me reflecting on what they have in common.

I've begun to think that all women are, in some sense, hidden figures. 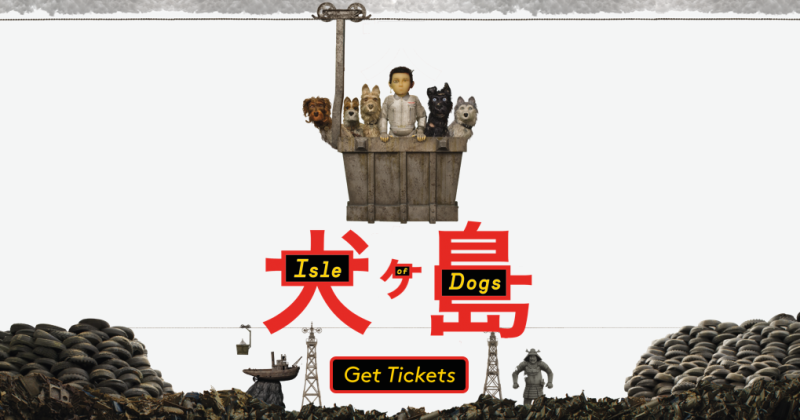 There are few working directors whose entire filmography is so uniquely stylized that the man or woman behind the camera becomes a genre onto themselves and Wes Anderson is perhaps the most grandiose example of that fact. His last three films; The Grand Budapest Hotel (2014), Moonrise Kingdom (2012), & The Fantastic Mr. Fox (2009) have each been masterful productions of Wes Anderson and his latest film, The Isle of Dogs (2018), is no exception. Like The Fantastic Mr. Fox, The Isle of Dogs is a work of stop-motion animation that fits so snuggly in Wes Anderson’s unique brand of visual storytelling. The film’s plot is relatively simple but by no means is it any less layered or complex than any of this other screenplays. And if you hadn’t guessed already, it looks incredible from start to finish. Wes Anderson has become one those directors audiences either love or hate so for those who already love ’his work you’ve probably already seen the movie or are planning on seeing it already. But if that's the case then just let me say this I think this may be an (if not the) perfect Wes Anderson film. At least that’s what I’m telling myself in preemptive justification while I catch two-three more screenings in theaters whilst I can.

I’ll be honest; I wasn’t looking forward to seeing Ready Player One, the newest courtesan to Hollywood grandmaster Steven Spielberg’s harem of family-friendly adventure fantasy films, up on the big screen. No, I haven’t anything against the man for the vast majorityof his features are nothing short of fantastic (with exceptions to Kingdom of the Crystal Skull and 1941), I simply just wasn’t all that jazzed up for Ready Player One’s premise. I still haven’t read the novel by Ernest Cline, but from what I gathered from the marketing and trailers it seemed like yet another cinematic hero’s journey structured as a Willy Wonka and the Chocolate Factory-esque wish-fulfillment fantasy with all the sweets replaced by video game/retro pop-culture icons. Now while that all sounds chaotically amazeballs on paper I was still somewhat skeptical of how the whole picture would turn out; and you know what? I had a total blast! Once again Spielberg has proven himself as the crown king of whimsically potent visual storytelling and has produced a cinematic adventure that’s so remarkably fluid and fun that I still feel silly for doubting him in the first place.

This week I had the pleasure of seeing Annihilation, the second feature film of writer/director by Alex Garland. You might remember him from his directorial debut with Ex Machina (2013). Annihilation is a strange, emphatic, and nihilistic science fiction tale of horror, and seeing as I am an enormous fan of everything in that sentence it should come as no surprise that Garland’s latest film (in my opinion) is one hell of a cinematic experience! With that being said, Annihilation is NOT for all audiences. There’s more than a few scenes featuring gruesome granger that will undoubtedly stick in the nightmares of those who are faint of heart, and the narrative makes for many unanswered questions. I LOVE when movies leave themselves open to interpretation, but I know not everyone feels the same way so if you consider yourself squeamish and prefer your movies with clearcut conclusions then stay far away from this one. But if you enjoy “hard” science fiction stories that challenges the audience and is so ensanguined with Lovecraftian cosmic horror that the screen’s practically sporting tentacles then why are you still reading this review? GO SEE IT WHILE IT’S STILL IN THEATERS!!!

Alright, let’s get the harsh stuff out of the way first. This film is NOT about the life and times of the self-made 19th-century showman, entrepreneur, and civil rights activist, Phineas Taylor Barnum. The Greatest Showman is a romanticize “follow your dreams,” movie musical starring Hugh Jackman as P.T. Barnum’s superego; specifically focusing on Barnum’s creation in a little venture that would eventually become the world-renowned Barnum & Bailey Circus. Now if you’ve paid any attention to the film’s marketing, you might’ve gathered that historical authenticity has been not so subtly replaced with a brand of magical realism common in many musicals of Hollywood. The “twist,” (I suppose) is that while the film takes place in the late 1800’s, the music and dance is anachronistic with an emphasis on a more contemporary arena rock/pop music sound. In many regards, The Greatest Showman is almost identical to Baz Luhrmann’s 2001 movie musical, Moulin Rouge! (2001), except for the fact that The Greatest Showman is good. Director Michael Gracey has made a wonderfully shot and brilliantly executed cinematic cabaret of charismatic actors, mellifluous vocalists, and ebullient dancers. This production is one of those rare occasions where the film’s alteration of its source material both heightens the viewing experience but also contributes to the ideals and vocations of P.T. Barnum. The Greatest Showman may be leaning more towards the “fictional” end of historical fiction, but it’s still an impressive feat of cinematic entertainment that’s sure to instill a feeling of childlike wonderment in your heart long after the credits stop rolling.